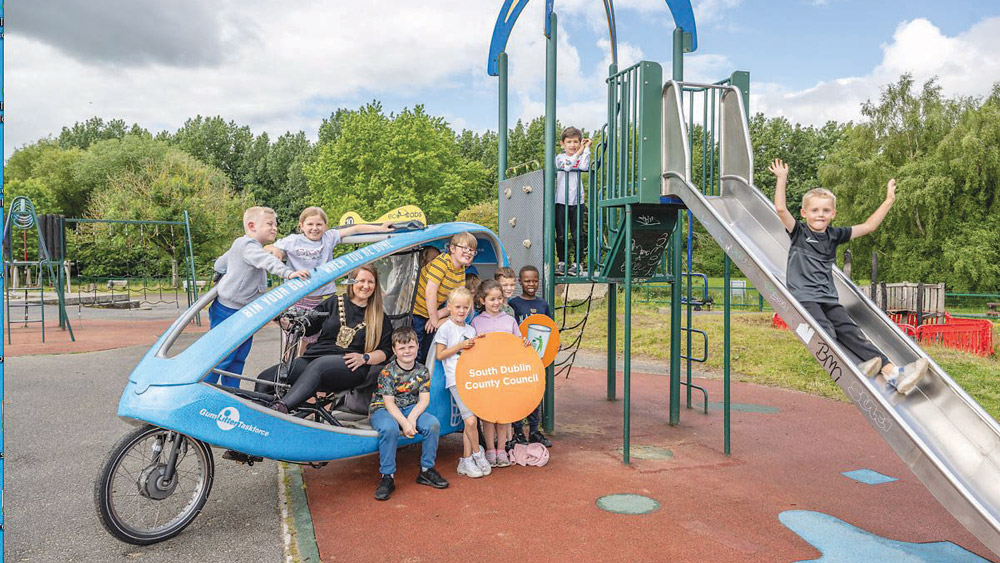 Emma Murphy with children from Rainbows After-school at the launch of the Gum Litter Campaign in Griffeen Valley Park, Lucan

The ‘Bin it’ education programme encourages young people to responsibly dispose of litter, with a particular emphasis on gum litter.

The ‘Bin it’ school roadshow will travel across the country and deliver 60 performances a year of their actor-based workshops in schools with an aim to deliver 180 performances by 2025. This cycle of the campaign kicks off in September and will shift its focus from secondary school students to students in fifth and sixth class.

At the launch, Mayor Murphy said: “While we have seen very positive results to date, we want to continue encouraging a positive behaviour change amongst the small minority

who are still disposing of gum incorrectly.”

The campaign has engaged with over 30 local authorities in Ireland to date and will continue to work with South Dublin County Council, promoting greater gum litter awareness through the GLT annual roadshow.

The roadshow will start in Dublin before travelling nationwide between the months of June, July and August, working with local authorities to promote responsible gum disposal.

Speaking ahead of the launch, Minister Ossian Smyth said: “I’m delighted to announce the continued partnership of the Government and the Gum Litter Taskforce on the National Gum Litter Awareness Campaign, which has been the driving force in reducing gum litter in Ireland since it was first launched in 2007.

“What’s particularly pleasing to see is that the campaign continues to resonate with the people of Ireland, with each year seeing further positive changes in people’s attitudes and behaviour towards gum litter.”