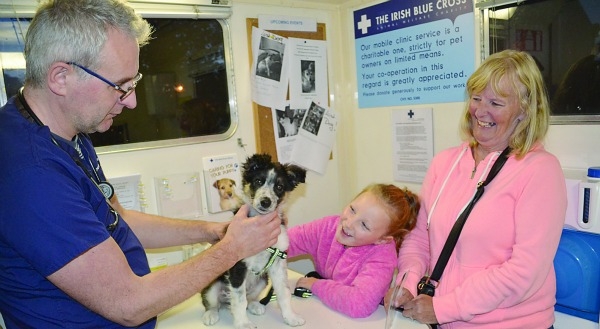 THE Irish Blue Cross clinic was robbed in Ballyfermot last week – forcing the animal care clinic to be relocated outside Ballyfermot Garda Station.

A masked man armed with a blade threatened volunteers and clients, before making off with the night’s donations at the Kylemore Road clinic on Wednesday, September 30.

Volunteers were shook up after the incident, including one man who has been with the Blue Cross for nearly 45 years.

It is the first such incident the charity has suffered in Ballyfermot in nearly 50 years.
Residents were horrified and disgusted to learn of the news, plastering messages of goodwill on the Blue Cross Facebook page.

Gardaí in Ballyfermot are investigating the robbery, which occurred just as the weekly hour clinic was wrapping up.

The Echo understands a thug was hanging around outside, and then entered the clinic wearing a balaclava, before making off with a small sum of cash donations believed to be under €500.

In a statement to The Echo, the Irish Blue Cross thanked gardaí, their volunteers and the community of Ballyfermot for rallying behind them.

The statement said: “From Wednesday, October 7, our Ballyfermot mobile clinic will be relocated to Rossmore Avenue, right outside of the Ballyfermot Garda Station.

“It will no longer be present on the Kylemore Road, where it has been for about 50 years. The clinic’s hours remain the same, starting from 7pm to approximately 8.30pm every Wednesday.”

“Our Ballyfermot Mobile Clinic team is undeterred in carrying out its invaluable work which will continue as normal, but just from a new location,” they said.

The Blue Cross operate 10 mobile clinics in Dublin every week, providing low-cost veterinary services for pets in need – relying on goodwill of clients to cover costs.

They also thanked “the people of Ballyfermot”, who gave “resounding words of support on our Facebook page which has been a great comfort to everyone involved.”

Gardaí are appealing for anyone with information to contact them at Ballyfermot Garda Station at 6667200.