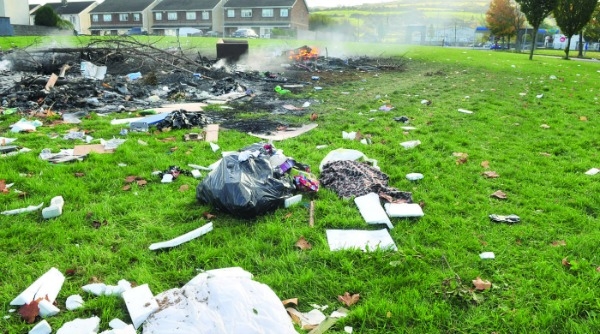 Bonfire nights give a grim reminder of clean-up costs

THE community has been left with a frightening reminder of Halloween, with greenspaces and playing fields left scorched and littered with charred debris and bags of illegally dumped household waste.

While Tallaght Garda Station received a high volume of calls on October 31, and into the early hours of November 1, there were no arrests or reported injuries in the Tallaght area over the Halloween period – with officers issuing a number of warnings and confiscating alcohol and fireworks.

A full public order unit, which is made up of 25 riot squad officers, was assigned to Tallaght for the night and worked on the ground in communities, with a team of 10 local community police.

Tallaght Superintendent Peter Duff told The Echo: “The station did receive a lot of calls, all night long, however there were no arrests made in relation to Halloween activities.

“There was a full public order unit in the area, which worked between Tallaght and Crumlin and there were five other public order units working across the city that were available to respond if we had an incident in Tallaght . . . but there was no need.

“The public order unit generally patrolled the area and over the course of the night there were only a few warnings issued and small seizures of alcohol and fireworks.”

He added: “In fairness, there was a lot of young people out and about being social and enjoying Halloween, and they should be commended for their good behaviour.”

An issue however, that has left some communities reeling is the aftermath of the bonfires, with a number of cars set on fire this year, trees set alight and a visible increase in the volume of household rubbish and waste that was left lying around green spaces for young people to burn.

An increase in the number of black bags, stuffed with household rubbish, that were left out by homeowners is a relatively new trend, with many of these bags lying around green spaces this week – a new type of anti-social behaviour that has added fuel to the fire when it comes to the damage left behind after bonfire night.

He said: “I have received many representations and complaints from residents and community groups throughout the Tallaght region highlighting the many illegal bonfires which were held.

“Only one organised and supervised bonfire was held in Tallaght and this event was on the grounds of St Martin De Porres Church in Aylesbury and was a huge success.

“However, open spaces throughout Tallaght were badly damaged by huge bonfires, and some of the areas involved include Brookfield, Fettercairn, De Selby, Kilnamanagh, Old Bawn, Springfield and Virginia Heights.

“The council needs to revisit its policy in dealing with bonfires and provision must be made in future years to have council staff on stand-by duty for the whole of the Halloween period.”

Last year, there were 121 bonfires recorded in Tallaght and 113 in Clondalkin, which cost the council in the region of €35,000 to clear.

Figures for this year are not yet available, however the council has started to identify and map all of the bonfire locations across the county.

A council spokesman told The Echo: “Quite a number of fires are still smouldering and it is therefore too early to remove these.