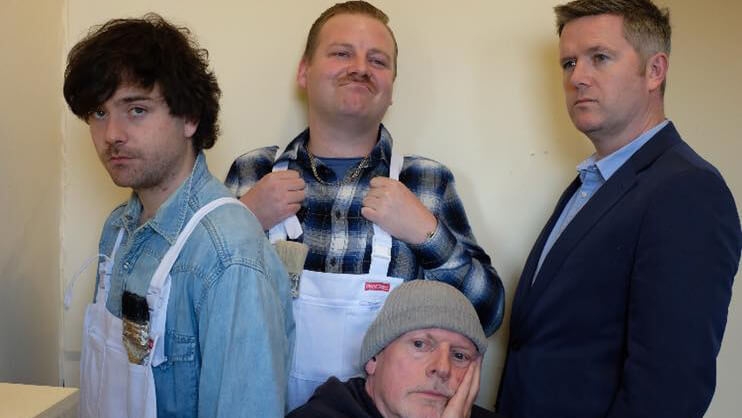 Brothers of The Brush Tallaght man stars in ‘proper’ play

Everyone knows a tradesman that feels as though they could give legendary comedians such as Richard Pryor, Billy Connolly and Joan Rivers a good run for their money if they had a 10-minute slot at an open-mic comedy night.

Brothers of the Brush tells the hilarious story of three house painters overseen by a shifty arrogant boss who runs a small business – but it goes deeper than all laughs as a tough new world is emerging, leaving the old tricks of the trade behind.

Tallaght native Stephen Jones stars in the play and caught up with The Echo ahead of its opening in The Civic Theatre next week.

How does it feel to open Brothers of the Brush in your hometown?

I always love it. The Civic is one of the first places I played and with it being only a few minutes down the road from where I grew up, it would have been one of the first places I saw a show. The turnaround of acting away for these long periods of time and getting to come home is nice. When you’re acting a while you look for these little extra things to keep you going and to get to play a show that my friends and family can see is a bonus.

You’ve a diverse catalogue of roles, from the bad guy on Red Rock to funny roles like Mick on Nowhere Fast, how does the preparation process differ between roles?

It’s mainly just small technical things like the accent for Red Rock was Dublin, and Allison Spittle – the writer of Nowhere Fast – has this Westmeath accent and wrote the show to be taking place somewhere in the midlands, so I had a midlands type accent. Obviously, I’m not a drug dealer like Laser Byrne is, so I have to think about what he has at stake, if I was in his shoes what am I trying to protect. Whereas Mick just wants this quiet simple life and to get married to his girlfriend. Whether it’s extreme or very simple, you always bring the character back to yourself, you always have a piece of yourself in each role.

Nowhere Fast got cancelled in the end didn’t it? I’d say you’re disappointed that you won’t get to continue that story with Mick after proposing in the last episode?

I’m really not too sure to be honest, the last I heard they were writing a second season. But it did have a great run and these things just happen, whether it’s budgets, finding funding, or creative differences. It is a little disappointing because it seemed there was a wedding on the cards and it was nice to do some comedy on screen.

I’d say it was a great bit of fun playing the villain on Red Rock?

It got a nice reaction and when it went to the later time on TV, from half-an-hour to an hour, post-watershed, we were able to do a lot more with the character in terms of language and violence. It was great to see the reaction on social media after each episode and seeing people shocked when he was killed off right at the start of an episode. I would have probably liked to do a bit more with the character, but it was the right time – it got a massive reaction.

Into the Badlands was such a massive production, what was it like to be part of such an ensemble like that?

When you’re on-set like that it moves so quickly. I was only out there for a day or so because I was only in one episode. The crew is huge and I got to shoot a scene with the lead actor Daniel Wu. As an Irish actor, you want to be part of these big productions and it’s nice for the CV to have this huge production company like AMC on it that have shows like Breaking Bad and The Walking Dead. I got to do an American accent as well, which is good to have in the showreel.

Got any other projects coming up?

Not that I know about yet, but we’re looking to bring ‘Class’ back to Ireland in autumn or winter, hopefully do a show in the Civic. And I have this show called ‘Northern Lights’ that I did with Seana Kerslake and it actually got nominated for Best New Play at the Irish Times Theatre Awards. We did it with my little theatre company and it was the only show nominated with no funding. It’s one of those shows that people are always asking what I’m doing next with it, we did a thing on the radio with it – and I want do something with that again.

It must be nice to get recognised for a project that you poured your heart and soul into?

Yeah it is. We’re nominated for a Writers Guild of Ireland award on June 19 as well, a ZeBBie as it’s called. It encourages you, especially during the quiet spells where you’re not working. I can fall back on my writing, which is actually how I got into acting. I used to do writing groups in Tallaght Library and went across to put on a show in the Civic then when I was 17. It’s another string to my bow, I’m not sitting there waiting for the phone to ring, I can focus on writing instead.

Lastly, what can the audience in the Civic Theatre expect from Brothers of the Brush?

It’s really a proper play. My mates from Tallaght ask me what the show is like and I always tell them to bring their family, partners and all because it’s a good old school play that you can just sit there and watch and have a good time – you don’t have to be thinking into things too much trying to figure it out. It’s very Dublin in terms of its humour. It takes place in ‘93/94 and it’s about a group of painting decorators, but it’s very relative to today. It’s a good night out, you’ll definitely enjoy yourself at it.

Brothers of the Brush is on for two nights only, June 11 and 12, in The Civic Theatre with tickets costing €19/17 from Civic Theatre website or from the inhouse box-office.