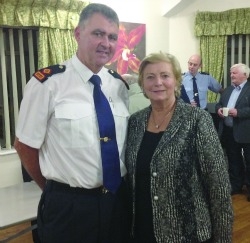 Burglaries rise by 25 per cent

A public meeting of the Lucan/Ronanstown Gardaí took place on Tuesday, led by Superintendent Dermot Mann, who gave a presentation on Gardaí's current actions in Lucan and Ronanstown, while asking local groups for their advice and input.

Throughout the course of the meeting, Gardaí revealed that household burglaries were up 25 per cent on this time last year, with 437 break- ins recorded in the district.
Speaking about the issue Superintendent Dermot Mann said: “Burglary for us at the moment, is certainly on the increase. Certainly in the last six weeks onwards I have had additional patrols out.