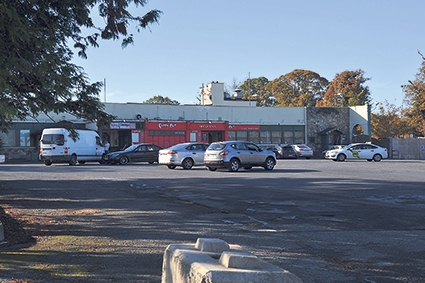 Business as usual for the Belgard Inn despite demolition approval

IT’S still business as usual for the Belgard Inn, despite Lidl recently being granted permission for the demolition of the pub to make way for the development of a licensed discount food store, a public house and four retail units.

The latest granting of planning permission is not the first time the site has been primed as a potential location for the German discount chain.

In 2014, South Dublin County Council granted permission to Lidl Ireland for a new store on the Belgard Inn’s overflow carpark, after the German discount supermarket purchased the land, including the pub and bookies, for an estimated €2.6 million.

As part of the original planning permission granted, it was to be business as usual for the landmark pub and bookies, with Lidl, in its new capacity as landlord, leasing both establishments to the current management.

However, in March of last year, Lidl revised its planning permission and lodged a new application for the site – which included demolishing the 45-year-old Belgard Inn, which is currently trading as normal and taking party bookings.

In September 2016, South Dublin County Council granted permission to the German discount chain for its revised concept store in Belgard, but the decision was then appealed to An Bord Pleanála, which overturned the council’s decision and refused permission for the development last February.

The application includes plans for the demolition of the Belgard Inn, the adjacent multi-deck car park and associated units.

It is proposed that the development will consist of a licensed discount food store including an ancillary off-licence area, and the creation of a single vehicular entrance and exit at the Cookstown Road.

There are provisions for four retail units, which the applicant has stated will be adaptable for a variety of commercial uses, and a public house.

The proposed development will also include a new road access off Cookstown Road to service the reservoir lands located immediately south of the subject site.

The proposal also includes improvements to the footpaths and an additional crossing point on the Old Belgard Road.

The council granted permission for the development last month, with a number of conditions.

These conditions include the omission of two proposed totem signs, and the stipulation that no additional development can take place above roof-parapet level.

In respect of the new public house which forms part of the application, the council has stated that no additional structure for the public house shall be constructed or placed behind the front building line of the proposed development for the purposes of creating a smoking shelter or beer garden.

In addition to this, the use of outdoor speakers or piped music in the vicinity of the proposed pub is prohibited, and the attic/mezzanine space within the development cannot be used by customers.

Gerry Crawford, General Manager of the Belgard Inn, told The Echo: “Basically, nothing has changed for us – we’re still continuing to trade and we’re still taking bookings.”

When asked about the projected timeline for the development, a Lidl spokeswoman said: “We have received a provisional grant of planning from South Dublin County Council.

“Until a final grant is received we are unable to confirm any specific timelines for this project.”