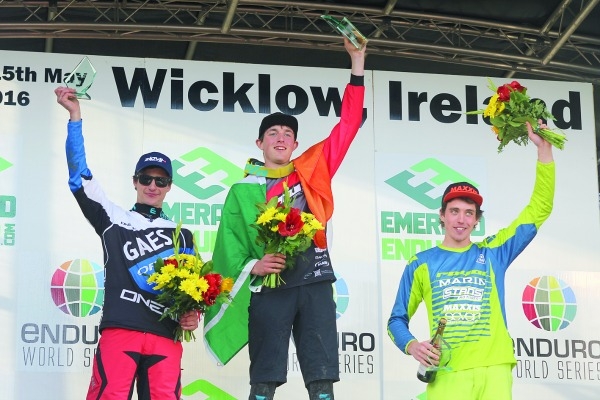 KILLIAN Callaghan secured his maiden Enduro World Series Under 21 victory in what was a thrilling third-round meet in Carrick Mountain, Co Wicklow on Sunday.

On the weekend in which his cousin Greg took the overall title, Callaghan showed he is well on course to joining him at the pinnacle of international mountain bike racing with a performance that ranked 26th in the Elite category and saw him tied with the world renowned Nico Lau.

“I knew I could do it. I was putting a lot of pressure on myself in the lead up to the race” Callaghan told The Echo.

“I felt it was my best opportunity to get a win and right now I’m just trying to take it all in that I’ve actually done it.

“It was a great boost to pick up all those championship points, but I’ve just got to get refocused for the next events” he added.

Niall Davis and his team raised the bar with the latest instalment for the series that would see Callaghan contest seven thrilling stages and eventually top the Under 21 class by .081 of a second.

The 18-year-old from Walkinstown opened his account with a steady eighth-place finish, with the pace being set by the French World Champion Adrian Dailly.

Bolstered by the massive support that turned out for him and other leading Irish riders, Callaghan clocked the fastest time recorded in his Under 21 category on Stage Two, completing one of the longest stretches of the meet in 5.17.57 with Slovakian rider Vid Persak coming home in 5.18.87, and Welsh man Leigh Johnson a further 1.5 seconds in arrears.

The Vitus Factory rider then took the lead for the first time on Stage Three, trading places with Persak with just one second separating the leading pair.

The short technical Stage Four proved another of Callaghan’s specialties as he put his BMX jumping and pumping techniques to good use through the wooded terrain to clock a stunning 2.42.55 minutes- a clear four seconds ahead of current World Series leader Sebastien Claquin.

With the hard work completed early in the day it was a matter of protecting his lead during the afternoon stages and he posted the fourth quickest time behind Claquin , Persak and Johnson.

While the Under 21 riders were in the final stages, other Irish competitors were also on course for honours.

Indeed Leah Maunsell was clawing her way back from an early mechanical problems to eventually claim a stunning victory in the Under 21 Women’s grade while former Olympian Robin Seymour romped home to victory in the Masters Category and Cube Factory rider Greg Callaghan was fighting off the claws of World Champion Richie Rude in the Pro Mens overall race.

Callaghan headed into the final stage with a four-second cushion over his close friend Leigh Johnson.

And the Walkinstown lad picked off the most fearsome lines down the rugged rocky lined section in a bid to protect his slender advantage before showing maturity beyond his years with a steady run down the closing stage.

And it was eventually confirmed that Callaghan had taken his maiden victory by .081 of a second from Vid Persak with Johnson in third spot.

Callaghan, who has enjoyed strong support from sponsor Ian Jackson, now sits seventh in the Enduro World Series with the next round of teh championship taking place in Italy in mid July.