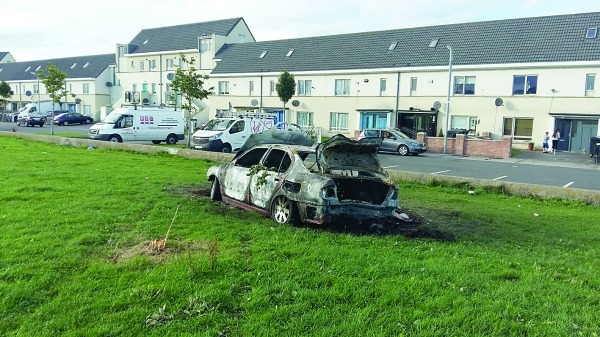 THE escalating problem of cars being driven and burned out on a local GAA pitch is being raised in council chambers this week, after the community space was significantly damaged yet again, reports Mary Dennehy.

In August, St Mark’s GAA Club in Springfield held a crisis meeting with Tallaght gardai and South Dublin County Council in an attempt to try and curb ongoing damage to its pitches, which over the years has seen its playing fields destroyed by scramblers, burnt-out cars, illegal dumping, fires and broken bottles.

The ongoing vandalism is having massive implications for the club, which, running in the community for more than 40 years, is losing juvenile members due to health and safety concerns associated with the playing fields.

Tallaght Central Sinn Fein councillor Cora McCann, who has been a life-long member of St Mark’s, said: “This is the first car that has been brought onto the pitch in a while and since we had the emergency meeting in early August things have quietened down.

“However, this week a car was lifted over the low boundary wall….which caused significant damage to the pitch while it was driven around and also when it was set alight.

“We need to come up with a solution, this behaviour is having a serious impact on the club and we are losing juvenile members.”

She added: “I am raising the issue in the council this week and suggesting that fencing is placed on top of the boundary wall, which will stop cars being lifted over.

“We will also be trying to get the community involved more and have plans to make the park more family friendly.”