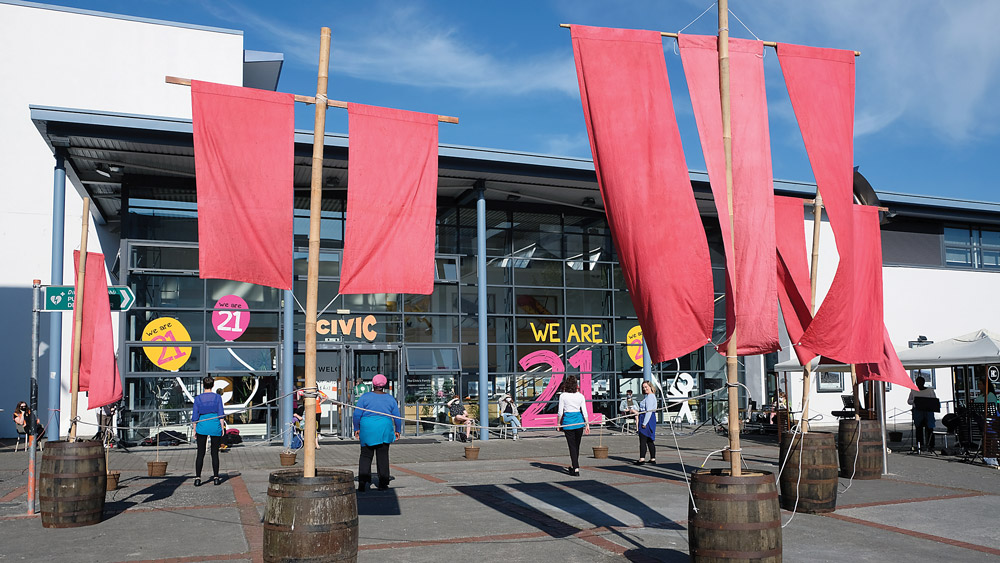 Cessair being performed outside the Civic Theatre last year

Cessair’s Journey: Free tickets for symposium are available to book

Free tickets for a symposium in Trinity College reflecting on a performance art project that was created by a Tallaght-based women’s collective are now available for advanced booking.

The symposium will take place in October as part of the Dublin Theatre Festival and will provide an opportunity for reflection on women’s collective SoloSIRENs’s project ‘Cessair’.

The outdoor project was held at the Civic Theatre in Tallaght last year, with an arresting display of performers and musical accompaniments detailing the story of a woman who set sail for Ireland.

The music guided the audience through the story of Cessair, who set sail for Ireland with over 100 other women, though only 53 survived the journey.

Performances took place outside the theatre, with ropes marking the boundaries of the stage. Actors dressed in blue and black moved around the stage, passing around the role of Cessair.

Only six spectators were present for each showing, though others were able to watch the performance from nearby steps.

After each performance, spectators were led into the theatre itself for a socially-distanced audio exhibition. Each person sat in front of their own speaker and listened to a different story.

The exhibition, which showcased 50 different female voices, was inspired by the souls lost during Cessair’s journey.

The symposium will explore the impact of ‘Cessair’ with input from representatives of the Abbey Theatre, the Civic, New York University, Tallaght Community Arts, and Trinity College.

The creative team and the participants from ‘Cessair’ will also be actively involved in the symposium, which will be held in the Trinity College Long Room Hub on October 13, from 11am to 3.30pm.

Titled ‘Today When I Listen, This Is What I Hear – SoloSIRENs Symposium 2022’, the performance has a very limited capacity.