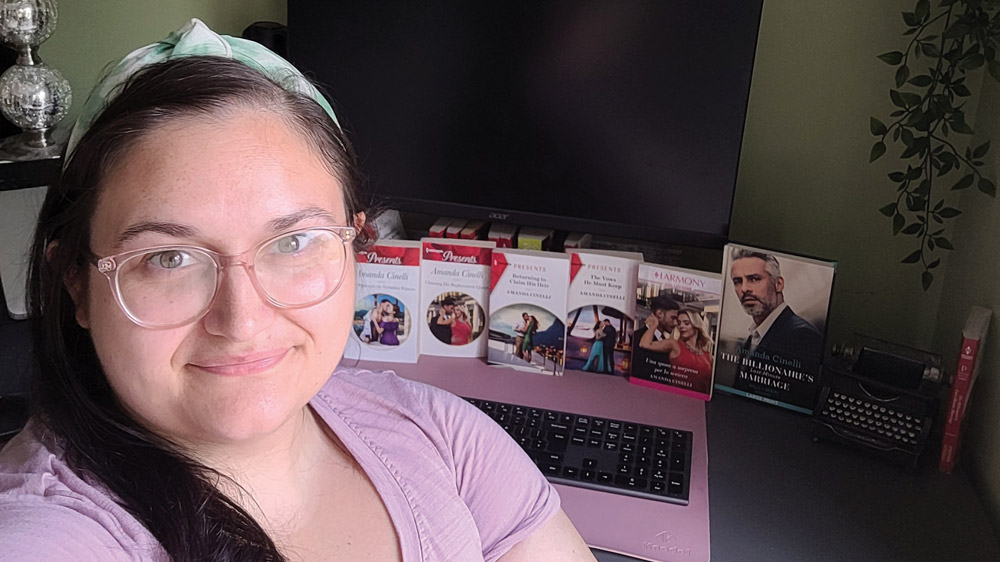 Writing Passion: Amanda is working on her eleventh romance novel

Amanda Cinelli always enjoyed giving backstories to the characters she drew as a child, but it was only when she was in her 20s that she realised she could turn this skill into a career.

After studying fashion design in college and then pursuing a career in childcare, the Firhouse author began to dabble in writing again, which she has now turned into a fully-fledged career.

Amanda is currently working on her eleventh novel for Mills & Boon with many of her books having an Italian slant, as she is from a large Italian Irish family who are well-known for running Cinelli’s chipper in Firhouse.

A past pupil of Firhouse Community College, Amanda told The Echo about her passion for writing romance novels, her joy at turning writing into her day job, and her plans for an upcoming novel.

What were your early experiences of writing and developing characters?

As a child, I was always reading or drawing pictures. I would fill copybooks with my own cartoons of people in detailed outfits and give them names and ages, hobbies and jobs. They always had a story – it was never just a picture to me. But I saw it as a passion for drawing their clothes, rather than a passion for character creation.

You went on to study fashion design and worked in childcare, but did you always feel the pull to write during this time?

I don’t think I saw making up my stories as also being a viable career path. When the time came to choose a college course, I thought fashion design made the most sense for me, but it turned out to be a poor fit and I dropped out midway through my second year due to severe difficulties with my mental health.

I later learned that this was one of many autistic burnouts I’ve had since my teenage years.

I didn’t get diagnosed with autism until I was 30 but looking back my education and career were significantly impacted by my struggles.

I moved into childcare once I realised that it was less socially demanding than working with adults.

What age were you when you wrote your first story, and what was it about?

I was 21 and it was after I first heard of National Novel Writing Month, which is an annual virtual writing challenge where people aim to complete a 50k word first draft in 30 days during November.

I had already been noodling around with an idea I’d had about an Irish nanny who started working for a gorgeous Italian single dad and his chaotic twin toddler sons.

I committed to finishing it for fun, even if it was terrible, which it definitely was.

There was a big extended family and a fabulous global restaurant business and a meddling matchmaking mama.

I’ve always read a lot of romance novels, so it was natural that my first attempt would be in my favourite genre.

You released your competition-winning debut novel, ‘Resisting the Sicilian Playboy’, in 2014. How did you feel about the feedback you received?

It was terrifying, having so many people read my work. Thankfully most feedback has always been positive, and it’s just part of the job now to accept that once the book leaves my desk it is open for commentary.

Everyone has a different taste and not everyone will love my stories and that is OK!

Did the success of your debut novel spur you on to continue writing novels?

Yes, I’ve been lucky to have great success with my books with readers all around the world.

I’m currently writing my eleventh title for Mills & Boon and it still fills me with joy that this is my day job.

Your novels are firmly in the romance genre, what is it about that genre that you find so appealing as a writer?

I think the romance genre has always felt the most comfortable to me because of the happy ending.

I have a lot of anxiety so reading something miserable or terrifying that ends in a cliff-hanger or with death can be very mentally draining for me.

I mostly prefer to read for entertainment and escape and the romance journey delivers on that promise, every time.

Creatively, it’s such a broad genre with subgenres for pretty much every mood you’re in and that really appeals to me.

What is the proudest moment you’ve had so far as a writer?

Probably the day I first saw my book on the shelves. I was out shopping with my husband in Tesco and I wasn’t expecting it to be released yet, so I just stood there for a while, staring at my name on a book alongside so many authors I’d been reading for years.

Do you have any future plans for new books?

I’ve just finished my tenth title for Mills & Boon, it’s called ‘Pregnant in the Italian’s Palazzo’ and it’s the third book in my ‘Greeks’ Race to the Altar’ trilogy I wrote about three half-brothers, who all have the chance to win their billionaire father’s estate if they get married and stay married for one year.

I had so much fun with it, it’s based loosely on Greek mythology and many of my characters are neurodivergent.

It was lovely to portray things like anxiety, autism, and ADHD in a positive light without the stereotypes.

My mission statement as an author is simply to show that everyone can be a romance character, because everyone is worthy of love.