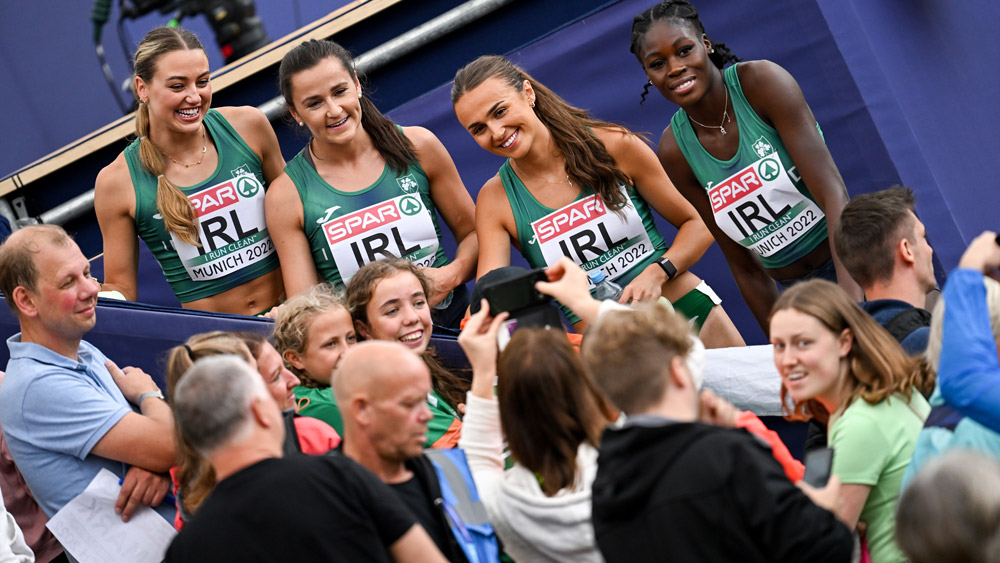 The Ireland Women's 4x400m Relay team, from left, Sophie Becker, Phil Healy, Sharlene Mawdsley and Rhasidat Adeleke meet supporters after finishing second to qualify for the Women's 4x400m Relay Final during day 9 of the European Championships 2022 at the Olympiastadion in Munich, Germany. Photo by Ben McShane/Sportsfile

Adeleke on fire as Ireland power into European 4x400m Final

RHASIDAT Adeleke turned in yet another stunning performance to help propel Ireland into tomorrow’s 4x400m final at the European Athletics Championships in Munich, the team setting a new national record of 3:26.06 in the process.

Running the third leg, the Tallaght woman, received the baton from Phil Healy in third place, but set about powering her way into the lead before sending anchor, Sharlene Mawdsley on her way.

The 19-year-old looked to have a sufficient gap to bring home the win and remained well out in front for the first 250m when Lisanne De Witte of the Netherlands overtook for the victory.

Sophie Becker had provided Ireland with a very strong start before handing over to Healy who battled hard to keep Ireland well in the reckoning over the second leg.

Yet it was Adeleke who really lit up Ireland’s challenge with a tremendous run, recording the fastest leg overall in the race of 49.49 to rocket Ireland in front.

It was a blistering display and one that came less than two days after Adeleke had raced home to fifth place in the individual 400m Final in which she also carded a new national record of 50.53.

Earlier today, there was disappointment for the Ireland men’s 4x100m relay team in their heat at the Europeans.

The squad, with included Tallaght Athletic Club’s Joseph Ojewumi and European 100m finalist, Israel Olatunde, were left out of the reckoning after their baton was dropped on the handover between Mark Smyth and Colin Doyle.