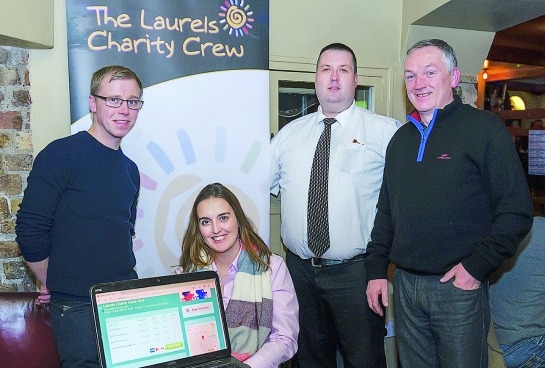 Charity crew break out the bikes and head to West Cork

THE Laurels Charity Crew are preparing to go on the road again for a good cause this year – after the launch of their 2016 event on Friday night in Clondalkin.

This is the eighth year the crew will raise funds for charity, after generating a whopping €580,000 over the last seven years for various causes.

Denis McCarthy, co-founder of the Laurels Charity Crew, said: “We are doing a lot of work with Our Lady’s Children’s Hospital and their Orthopaedic Department, with a project called Straight Ahead.

“This year’s cycle will be from West Cork to Dublin on April 15, 16 and 17. Long-term, we hope to have raised €1 million for charity in the next three years.

“We raised €118,000 last year. In the last three years we have done 10k runs in Corkagh Park, raising funds for the Ciaran Carr Foundation to put 34 AED (Automatic External Defib-rillator) units in schools in Clondalkin, and last year we helped to fund eight public access for AED’s in Clondalkin.”

This year’s new route will be a challenge – taking in a total of 252km and including a stop-off in Carlow on Saturday night.

To cycle or volunteer for the Laurels Charity Crew Cycle this April, simply sign up at: Pedal Eventbrite (Laurels Charity Cycle 2016. The link can be found at http://goo.gl/fwafoA.