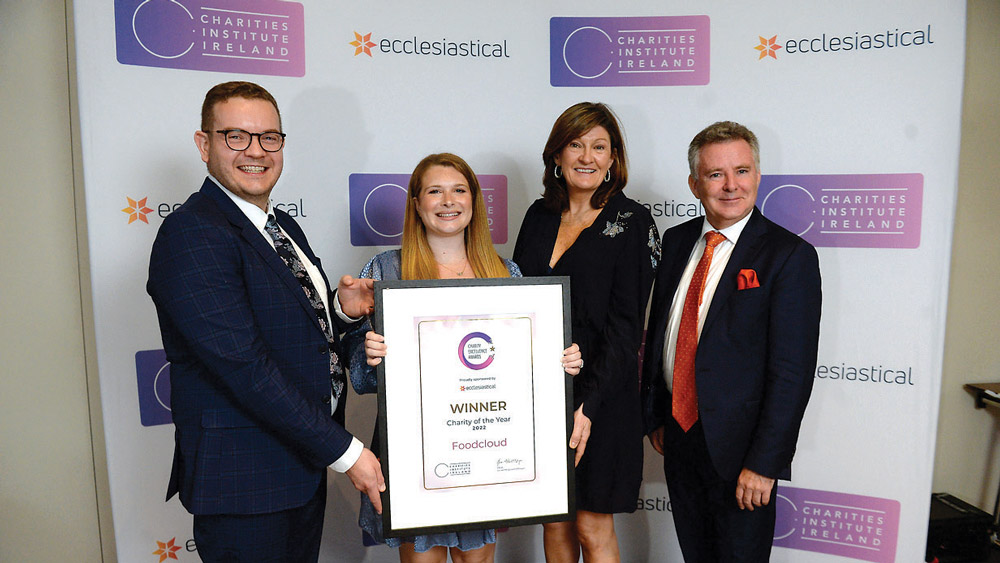 FoodCloud was awarded this year’s Charity of the Year at the Charity Excellence Awards 2022. Pictured celebrating the win are representatives from FooudCloud (L-R), Brian Curtin, Volunteer Manager; Tara Belford Clarke, Development Manager; and Suzanne Delany, Development Director alongside Scott Hayes, Head of Relationship Management at Ecclesiastical Insurance, the sponsors of the Awards Photo by Caroline Quinn

Charity of the Year honour for Social Enterprise FoodCloud

SOCIAL Enterprise FoodCloud had plenty to celebrate this week when it picked up the top prize of Charity of the Year at the Charities Institute Ireland’s Charity Excellence Awards 2022 recently, reports Abigail Glynn.

Based in Broomhill Business Park, FoodCloud has a longstanding commitment to the community and showcases an ability to assist those most deprived by redistributing 100 million meals to its network of community groups and charity partners across Ireland and the UK.

The event saw representatives from leading organisations and community groups come together to celebrate and recognise the charity sector’s contribution to Irish society over the past year.

Iseult Ward, CEO and Co-Founder, FoodCloud told The Echo: “We are honoured to have received this year’s Charity of the Year award from the Charities Institute Ireland.

“This is a huge accomplishment, after a challenging two years where we saw a massive increase in demand for our services to provide surplus food to charities, and a true testament to all the work our team and partners have done in coming together in support of local communities.

“This recognition is more important than ever as we meet further challenges in the coming winter months, with the rising cost of living and climate crisis.”

Áine Myler, Chief Executive Officer at Charities Institute Ireland, said: “We are thrilled to partner with our sponsor Ecclesiastical for the 2022 Charity Excellence Awards.

“The Awards offer an opportunity to celebrate the fantastic work being done by charities in Ireland and we are so pleased to be able to recognise and celebrate these achievements.

“All of the charities nominated in each of the categories worked tirelessly day in, day out to enrich and improve the lives of so many and make a huge difference to thousands of lives.”

These awards aim to highlight and reward the very best within the charity sector. To find out more information about the Charity Excellence Awards 2022, visit charitiesinstituteireland.