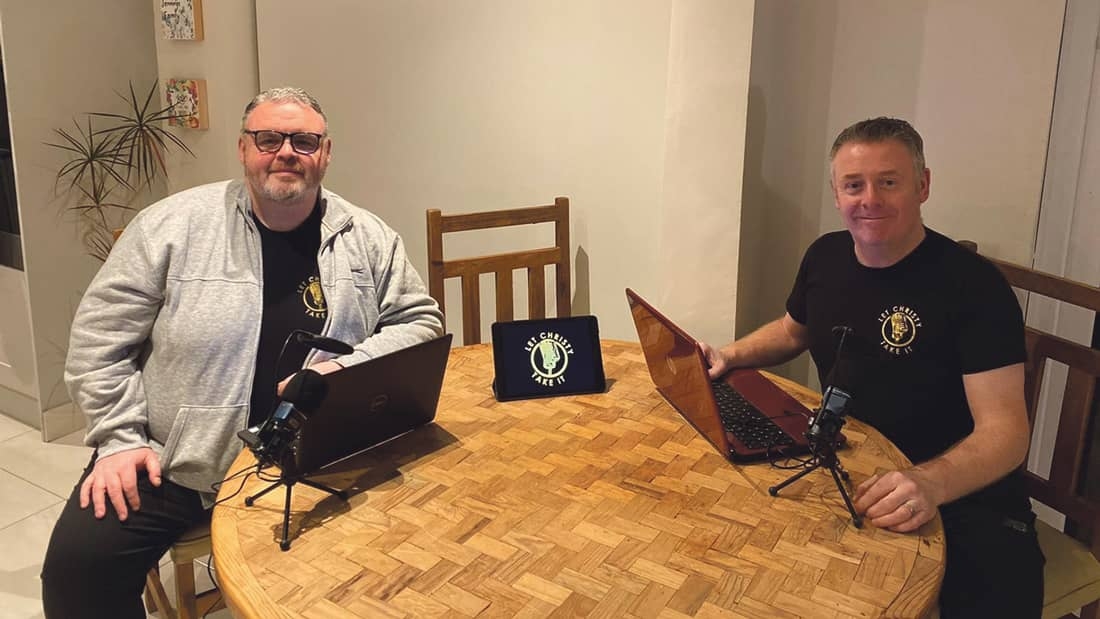 TWO childhood friends who started a lockdown podcast to cover their love of movies and music, have secured some high profile guests from the industry in a relatively short space of time.

Kieran Mullen from Saggart and Derek Jennings from Clondalkin set up a little studio at the home of Derek’s parents house in Neilstown last July.

Their first few episodes of their podcast ‘Let Christy Take It’ focussed on old movie reviews.

However, their format evolved and they have snagged some impressive guests including musician Pete Williams (founding member of Dexys midnight Runners), Stan Cullimore from The Housemartins, Rowetta from the Happy Mondays, and Robert Arkins, who played Jimmy Rabbitte in the hit movie The Commitments (1991).

To date, the pair have seen their subscribers grow to 3,000, and with former Beach Boy Bobby Figueroa set to appear on this week’s episode (number 26 for the podcast), they only way is up.

“We are both in our 40’s and friends from childhood who would try to catch each other out with trivia,” said Kieran.

“During lockdown I thought about things we still haven’t done, I said it to Derek and the next day he bought a mic. So we decided to set up the podcast in our studio in Neilstown and called it ‘Let Christy Take It’, a line from a classic Irish movie (My Left Foot 1989).

“The first few episodes were just our musings and reviews but we have attracted a wide range of international and national acts.”

The pair say 80 per cent of their subscribers are Irish but they also have listeners from Europe and Japan.

“We just put out a request with people on social media. I think now with everything that a lot of people have more time on their hands,” said Kieran.

Their guests have also helped to open doors to further opportunities with other celebs which the pair hope to pursue.

“At the start we were interrupting guests, but now we just let them talk,” said Kieran.

“It goes out every Saturday morning at 10am, I do the editing. It is a labour of love, and costs us money but we love it.

“We are always looking for help with sponsors to buy equipment. We will never get rich but we will get better at it and more polished.”

One of their subscribers Mark Cullen from Clondalkin has also joined the team, creating the website for free.

The trio are also looking for local people who have a ‘good news’ story to appear on the podcast.