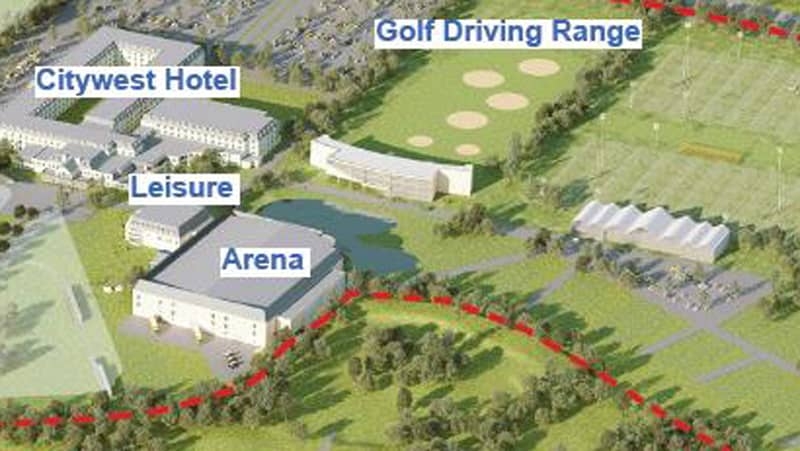 SUBMISSIONS for substantial housing plans have been made to South Dublin County Council ahead of the new county Development Plan (2022 – 2028), which will be signed off following public consultations later this year.

Among the proposals in response to the Issues Paper relating to the South Dublin County Council Development Plan 2022-2028, are from the owners of Citywest Hotel, who are seeking to rezone their golf courses for housing and provide social infrastructure, amenities and facilities.

Cape Wraith, the owner and operator of Citywest Hotel and Convention Centre, say the area benefits from “close proximity” to public transport and infrastructure along with a “clear market demand” for housing in Fortunestown /Citywest /Saggart.

In their submission, the group encourage the council to identify “socially responsible land owners” for residential developments.

Sinn Féin Housing spokesperson Eoin Ó Broin TD warns that rezoning is a “serious issue”, and one of the few remaining powers available to councillors.

He said it is imperative decisions on the issue are not led by developers, but rather within the domain of public discourse.

“The Chief Executive of the council will present his report in May or June, with his assessment on population growth, housing needs, the amount of land, planning permissions and any recommendations the manager might have regarding these things and others.

“No decision would be made until all the information is before elected members. I’d expect councillors if looking at new rezoning, will be asking if it can support additional development and housing.”

Cape Wraith have also raised the issue in their submission that a significant quantum of zoned residential land in the county (930 acres) has not been progressed for residential development for the past 20 years.

“Absolutely that is an issue, there is a huge volume of zoned land, not all built on,” agreed Ó Broin.

The golf courses proposed for development

Ballyfermot Cllr Vincent Jackson (Ind) understands local opposition to various housing plans in the county but acknowledges the need for proper infrastructure prior to development.

“I wouldn’t build another Ballyfermot, North Clondalkin or Tallaght – I would build them but would ensure proper social integration, rather than ‘it’s our site we’ll do what we want’ build 2/300 houses and then we are playing catch-up,” said Cllr Jackson.

“Some of the decisions in the past by elected members were not great either.”

This is a view echoed by Deputy Ó Broin, who cites developments like Clonburris as the gold standard in modern developments.

“Clonburris is a very important piece of land, at every stage of the build, it has to meet targets of supporting local infrastructure. We have to be seen to be more firmer. Is there adequate transport structures etc.

“Also remember some previous plans led to questionable decisions on land in this county. We can’t go back to those days. The best place for these decisions is in the public chamber.”

NEWER POSTWetlands on track to bounce back
OLDER POST1,123 residential plans and hotel at a cost of €625m for old Nissan site