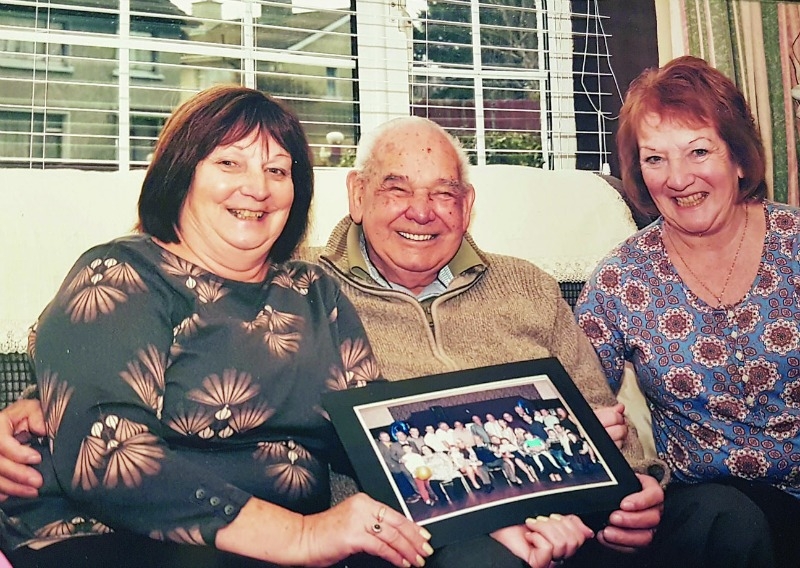 A CLONDALKIN man who was placed into care after his mother gave birth, was reunited with his half-sisters for the first time this week.

Booth Road resident John Clarke (90) never believed he would be successful in tracking down his long-lost siblings when he started out on his quest 20 odd years ago.

His daughter Pamela told The Echo: “His mother Mary Clarke gave birth to him in 1926 out of marriage, and put him into a boys home. She stayed with him, and then moved to England to get a job.

“Dad was brought up in Church Street and moved to Clondalkin when he was four years of age, and has lived here ever since.”

She continued: “He has been searching for his family for years, but never thought he would be successful until his brother-in-law Tom offered to enrol the help of genealogist Hilda McCauley, who runs Palmerstown Records.”

Mary Clarke cared for her son in St Kevin’s for the first 14 months of his life before moving to the UK when she was discharged.

A former army man, he worked at Clondalkin Paper Mills until his retirement, and also played for Round Tower GAA club and acted as a referee for 20 years.

John and his brother-in-law Tom spent months chasing leads and getting nowhere until they enlisted the help of Hilda McCauley.

Hilda started work in 2015, and in 2016 discovered Mary went on to marry Englishman Arthur Locke, and have six children – Joyce, Arthur, Brian, Judith, Bonnie and Valerie.

John emailed the family in Birmingham, and this eventually led to him meeting up with his half-sisters Bonnie Stanford and Valerie Hipkiss at Bewley’s Hotel in Newlands Cross this week.

Unfortunately John had a stroke over Christmas, but the long-lost reunion with his half-sisters “meant a lot to him”, according to Tom.

Pamela said her father has now been able to track down “all his family” and discovered cousins living in Dublin.

“He is over the moon about all this, and is going to meet his brother Brian in March in Somerset,” she said.