Clondalkin Rugby players in a huddle before the start of the game (Images: James Lawlor Photos)

CLONDALKIN’S firsts made the short trip down the N7 to Newbridge and came away with a 32-17 victory to make it six wins from seven in the league.

Head coach John Bagnall was able to welcome back Ryan Maher, Simon King and Conor Branigan to the starting side but would have to make do without his live-wire flanker James Farrell, who has been immense all season.

Clon started brightly, winning a clever kick-off followed by some excellent carries from number 8 Lemeki Vaipulu and full-back Niall Nolan which immediately brought the visitors to the Newbridge try line in the first minute.

The hosts opened the scoring with a well-struck Robbie Waters’ penalty.

Their good start wasn’t done there and a breakaway try, added to by another Waters’ penalty had ‘Bridge 11-0 up with as many minutes played.

This seemed to be the wake-up call Clon needed as they adapted their game plan perfectly to suit the conditions. 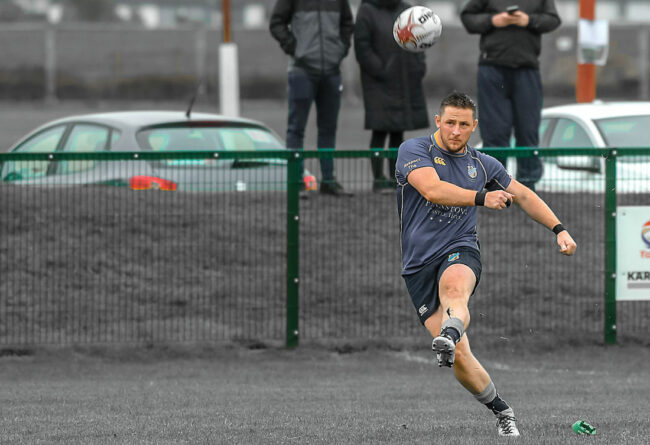 Strong carries in the tight from Brian “Bruiser” Doyle and Kev Dunphy got Clon some much-needed momentum which Simon King and Lemeki happily seized upon time and again making massive yards after contact.

The visitors’ first try arrived when Lemeki got over the line to make 11-5. Clon’s lineout were getting on top and they finished the first half strongly, with a Niall Nolan penalty leaving matters finely poised at 11-8 to Newbridge at half time.

If Clon were thinking that the conditions would see them home, Newbridge had other things planned, with a try from the opening kick-off of the second half to leave it 18-8. 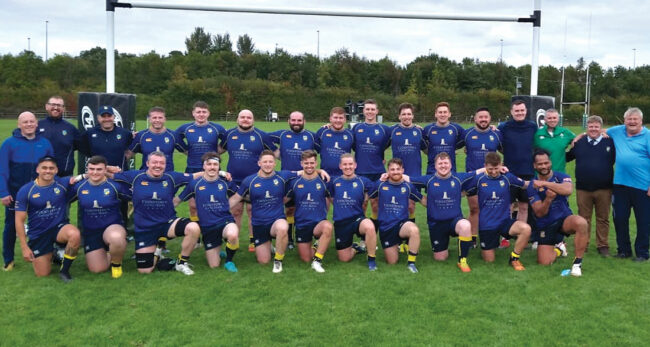 To their credit, Clon once again showed great composure when trailing by 10 points.

Scrum half Conor Branigan, along with replacements Stephen McKenna, Eoghan Farrell and Luke Swayne on debut upped the tempo in attack.

This created space in the wide channels for Eoin Delaney and fullback Nolan to make metres at will. It was from one of these breaks that Clon got their second try, with Delaney hauled down deep in the 22 followed by a series of pick and goes from the pack.

The Newbridge defence held firm, but Lemeki got Clondalkin back in it, with another try from close range.

Nolan was on hand to add the extras to leave it all square 18 points apiece with 15 minutes to go. Clondalkin hit the front when captain Russell’s picked off an intercept and raced home from 70 metres for a third Clon try.

Nolan once again added the extras and the men in blue led for the first time at 25-18 with time running out.

Newbridge threw everything in search of a draw but a spilled ball sat up perfectly for Russell to once again break clear.

This time Russell opted to draw the full-back and passed to centre partner Ryan Maher to run over to bag the bonus point.

Nolan fired over a brilliant touchline conversion to see the travelling party take the spoils.

NEWER POSTMatch of the Week: Tallaght Town and Knocklyon share the spoils in U12 encounter
OLDER POSTLocal Faces: Paddy Jackson