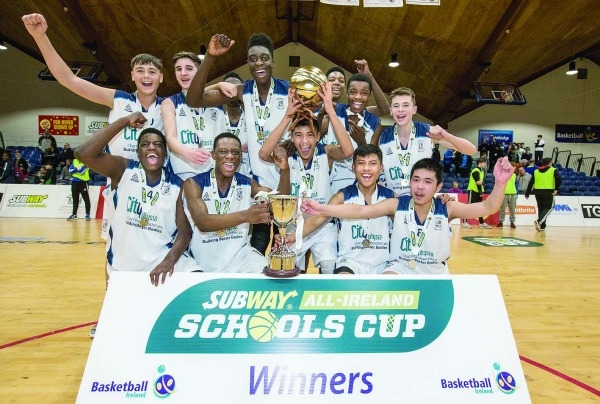 COlÁISTE Phádraig Lucan are the Subway All-Ireland Under 16A Boys Basketball Cup champions following a thrilling 45-44 win over St Malachy’s College of Belfast in the National Basketball Arena on Monday.

MVP Kris Arcilla shook off a stomach bug to hit, what proved to be the game-winner, but there was still plenty of time for drama before the final buzzer.

“I’ve had a few matches like that over the year’s but that one takes the biscuit,” said winning Coach David Gray.

St Malachy’s took longer to settle and were 4-0 down before Peter Henvey and Conor Cooke gave them the lead for the first time.

By then the Lucan boys had set out their stall with electric guard play, hard work under the basket and a scoring touch from Samuel Mohamed.

Malachy’s earned a 9-8 lead with the last basket of the quarter – a deft assist from Jack Summersgill freeing up Cooke for a lay-up.

Coláiste Phádraig put up the first significant run of the game to turn a three-point deficit into a six-point lead in the second quarter.

Max Amadasun was dominant with blocks and rebounds, forcing St. Malachy’s to withdraw to the perimeter in search of open looks.

CJ Fulton made it count with a deep-two and a triple to snap the run. Arcilla’s electric pace was yielding free-throw oppor-tunities and the young point guard gave CPL a 19-17 lead for the half.

Coláiste Phádraig trailed by three heading into the final quarter and leveled the game with five minutes left through control on the offensive boards and a fast break from Kabir Akanbi.

Malachy’s appeared to have found another gear when Niall McGinnity upped the ante on defense and Fulton hit a nerveless buzzer beater.

But they were sooned pegged back by Akanbi’s deep two and Arcilla made it 45-44 with six seconds remaining.

A monster block from Amadasun rejected Mal-achy’s first attempt at a game winner. They thought they had done it when Matthew Mulholl-and found the net but his last-gasp attempt was a fraction too late.