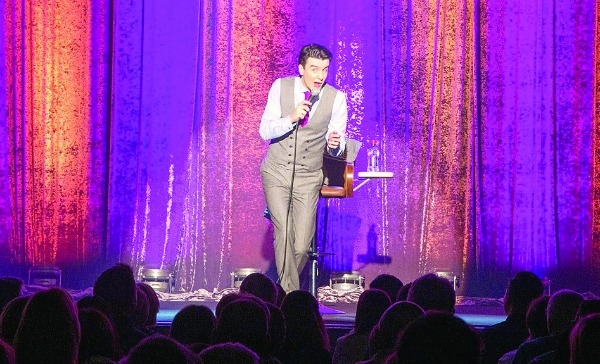 Comedian Al Porter sinks a pint in celebration of Edinburgh

AFTER a sell-out run in the Edinburgh Festival Fringe and a prestigious comedy nomination, Tallaght comedian Al Porter told The Echo this week that “nothing beats” a pint in The Dragon.

The Springfield 23-year-old arrived back on home soil last Monday after his Al Porter At Large show enjoyed a sell-out month at the Edinburgh Festival Fringe, and landed him a nomination for Best Comedy Show at the Edinburgh Comedy Awards – known as the ‘comedy Oscars’.

Despite not winning the award on Saturday, Al was the only Irish comedian up for the gong this year – with Irish winners in the past including Tommy Tiernan, Dylan Moran and Graham Norton.

“It was great for me as a comedian and as an Irish comedian to be recognised at this level”, Al told The Echo.

“This is a really UK-dominated industry, so the recognition was amazing.

“I really never expected a nomination. A lot of the comedy shows awarded these days have an artistic element to them or a certain theme, but my show was just pure fun and involved me telling jokes for one-and-half hours.”

He added: “Edinburgh was amazing, I was in a 200-seater cabaret bar and comedians like Steve Coogan and Jack Dee came to see me.

“The whole thing is entirely surreal and I still don’t get what all the fuss is about . . . and it’s a very strange feeling when papers like The Guardian are giving my show a four-star review.”

Al, who still lives with his parents in Springfield, is bringing his award-nominated show home – and on a national tour.

“I am inspired by cabaret shows and the working men’s clubs, so when people come to see my show, it won’t just be a comedian standing in front of a black curtain.

“I put a lot of money back into the stage decorations and lights and have an eight-piece band called the Sugar Cubes who play for about 20 minutes while people are relaxing and having a drink, then comedy duo Totally Wired come out and sing a few funny songs and then it’s me . . . with one-and-a-half hours of award-winning material!

“The show is silly, gossipy and made up of honest, real-life anecdotes.”

Al’s nationwide tour starts in Vicar Street this September 9 and 10 before it takes to the road for the next three months, finishing in the Civic Theatre, Tallaght, in early December.