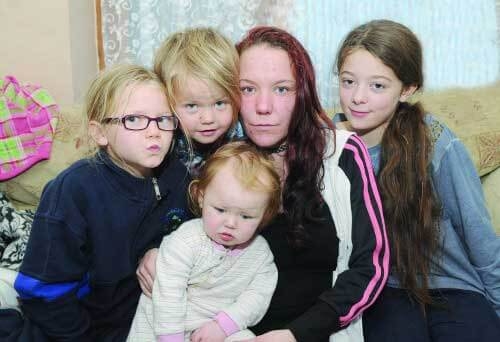 Community rally as family lose everything in house fire

TALLAGHT is staging its own Band Aid on January 22 for a mother and her six children who tragically lost everything when a fire ripped through their Firhouse home on Sunday evening.

Local musician, and former Voice of Ireland, contestant Kenneth Usher (28) organised the fundraising gig after hearing how Antoinette Geoghegan and her six children were left homeless after losing everything in a blaze which gutted their Old Court Manor home.

Antoinette and her family moved into the council-owned home in Old Court Manor only six weeks ago, after the mam-of-six was left homeless after the property she was renting in Cushlawn was put up for auction by bank foreclosure.

After spending a number of months homeless, Antoinette, who is currently pregnant and due in April, was placed by South Dublin County Council in Old Court Manor, a situation which was “a dream come true” for the young mother.

Antoinette told The Echo: “I am absolutely devastated that the house is gone, the fire totally destroyed the house and all of our belongings.

“All the kids’ toys and clothes are gone and we’re now living in a hotel.

“We were so happy in the house, it was a dream come true and the kids were delighted, but now there’s nothing left.”

Antoinette and her six children were in the house when the fire started in a downstairs room just before 7pm on Sunday, January 10.

The family managed to escape the blaze unharmed and are now living in a hotel.

After hearing about the blaze, Kenneth Usher, who is unknown to the family, decided to organise a fundraiser to help Antoinette replace some of the items lost – and the children’s Christmas presents.

“When I heard about what had happened, I could only imagine the heartache for the family, especially the kids,” Kenneth told The Echo.

“I’m a dad and have one child myself and can only imagine how hurt she would be if she lost everything, and here we have six kids.

“I put a post on Facebook looking for help in organising a fundraising gig and the response has been overwhelming.

“The generosity of people and their willingness to help has been unbelievable…and to see so many people coming together and volunteering their time and service for one family is amazing and a credit to the Tallaght community.”

A number of local acts, including Kenneth, Established, Paper Crowns, Luke Clerkin and The All Sorts, are taking to the stage of Grumpy McClafferty’s, which donated the space for free, on Friday, January 22 from 8pm.

Tickets cost €5 and every penny raised at the door and through the raffle, which has been supported by local people and businesses, will go directly to the Geoghegan family.

Commenting on the fundraiser, Antoinette said: “I’m so grateful to everyone involved, it’s hard to comprehend that people would do this for strangers.

“A big thank you from me and my kids to everyone who has rallied around us.”