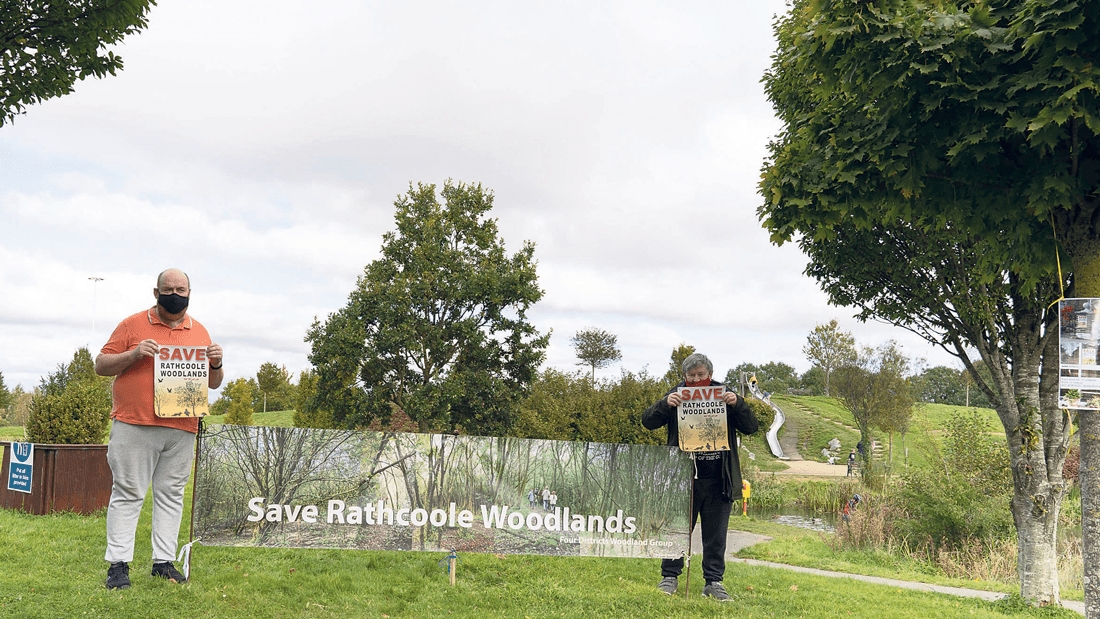 Concerns at plans to develop 250 houses on woodlands site

A LOCAL environmental group is “gravely concerned” about plans for a residential development in the Rathcoole woodlands, after they found an ecologist’s report that indicates that the woodlands should be protected.

As previously reported in The Echo, South Dublin County Council plans to develop 250 houses, a number of GAA pitches, a primary school and a library at the woodlands site, which is located behind Coolamber and Rathcoole Park.

The contentious plans caused local residents to form the Four Districts Woodland Habitat Group, and last year the group submitted a petition against the draft plan for the development that was signed by over 650 schoolchildren.

A professional ecologist – who has no association with the group – submitted a report on the woodlands to South Dublin County Council last September.

The ecologist’s finding was that an area of site fell under the heading of ‘Priority Annex 1 habitat to 91E0 Alluvial forests with Alnus glutinosa and Fraxinus excelsior’, as listed under the EU Habitats Directive.

According to the report, this finding “has implications for any future developments within or adjacent to the Rathcoole woodland site”, and that as the habitat is in a poor condition, preventing further loss and degradation of the site and surrounding ecosystem is “imperative”.

Alistair Mullane from the Four Districts Woodland Habitat Group said: “The group is gravely concerned that the council will ignore these findings and proceed as planned, or the council will propose to divide up the woodland in order to carry out some development.

“Removal of part of the woodland will adversely impact what is left.

“The council need to find an alternative site particularly given their commitments in their Climate Action Plan, their Draft Biodiversity Action Plan and in the County Development Plan.

“Full protection needs to be afforded to this natural native woodland, an example of which is not known to exist in South Dublin.”

Joe Gowran, CEO of Woodlands of Ireland, visited the Rathcoole Woodlands and wrote a report concluding that “it is a unique example of the processes of succession and natural regeneration in motion, with secondary species now being generated by both bird and mammal activity.

“As a natural asset owned by South Dublin County Council, it’s real values may only be realised by conservation in co-operation with the local communities of Rathcoole and Saggart.”

When asked what the Four Districts Woodland Habitat Group would think if the council decided to place the development on a portion of the site and leave other aspects of the woodlands, Deirdre Tierney from the group said: “If you break up the area then it removes protection from the habitat – you’re opening it up to damage.”

Green Party councillor for Clondalkin, Peter Kavanagh, asked the local authority about its “commitment to preserving and protecting all Annex 1 habitats and protected species” at last month’s council meeting.

The council responded, in part, that “the National Parks & Wildlife Service (NPWS) is responsible for the designation of conservation sites in Ireland.

“The NPWS works with landowners and users, and national and local authorities, trying to achieve the best balance possible between land-use on the one hand, and requirements for conserving nature in these selected areas, on the other.”

A spokesperson for SDCC told The Echo: “With regards to the council-owned lands at Rathcoole, the council is working on a masterplan for these lands and an initial proposal on this was presented to [the] council in 2019.

“Alongside this all necessary environmental assessments and surveys are being prepared and these will inform any final proposal that comes forward.”