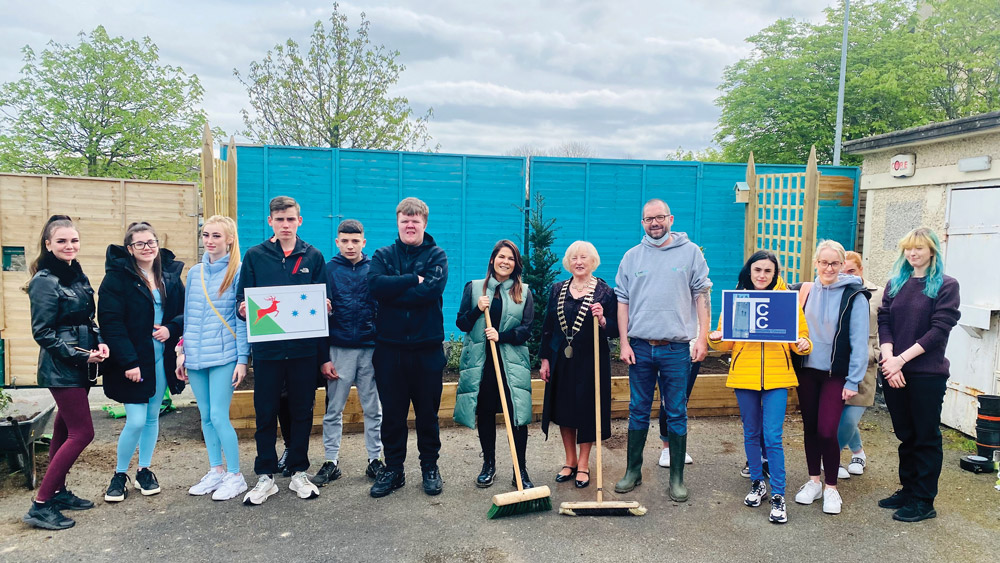 PRIORY Youthreach on the Greenhills Road in Tallaght have upped their green credentials with the opening of a ‘container forest’ in the education service’s grounds last week.

The tree planting was carried out by volunteers from Tallaght Community Council (TCC), who are currently running a schools’ forest programme in Tallaght.

The development of a small forest in the grounds of Priory Youthreach presented a unique challenge for the TCC volunteers, as the service’s only section of outdoor space was tarmacked and they have no green space.

Not ones to be deterred, volunteers from TCC went to Priory Youthreach last month and built wooden raised beds and bench planters to the rear of the old school house where Priory Youthreach is located, to allow a small container forest to be planted.

The plant selection consists of small trees and shrubs, to help create a suitably-sized mini woodland for Priory Youthreach.

It contains tall yew trees and holly bushes, along with a variety of ferns and hostas. The raised beds also include some flowering pollinators such as Astilbes and Jasmine.

Last week, the container forest in the grounds of Priory Youthreach was officially opened by TCC committee volunteers and rotating Tallaght Person of the Year, Rose O’Keeffe.

Speaking at the opening of the container forest, voluntary chairperson of TCC, Liz Kennedy, said: “It was important to us that we provided Priory Youthreach with a forest, however small it might be.

“This school didn’t have any planting on-site and for that reason we were determined to find a solution to create a forest for their students.

“We were delighted to be able to adapt the program and innovate so we could make the forest a reality for them.

“This truly is an urban container forest, and it will provide some much welcome access to greenery for the children here, and it will certainly help to improve the biodiversity on this school campus.”

The work on the new container forest was warmly received by Priory Youthreach, with the staff already looking forward to the positive impact the new green space will have on learners.

Paul Curtis from Priory Youthreach said: “We were delighted Tallaght Community Council could create a forest on our very small school site, given the physical challenges of our very urban setting.

“It will make a huge, positive impact on the daily lives of our learners, who now have a garden space to relax in, help nurture and watch as it grows.”

The Priory Youthreach container forest is the latest development in TCC’s schools’ forest programme, which is supported by Amazon Web Services (AWS) and Google.