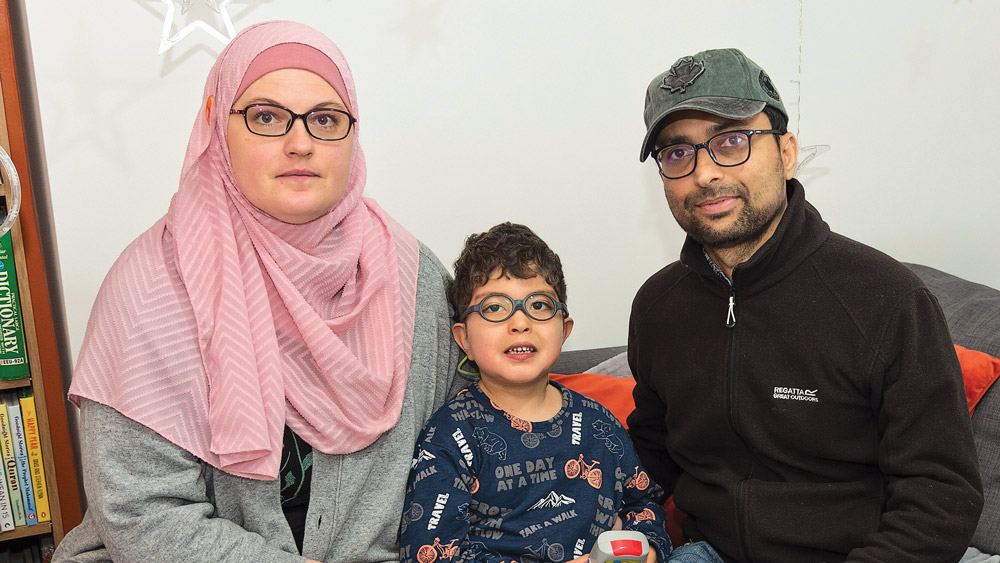 Abu Bakr with Aija and Faisel

THE parents of a young boy who has spent the seven years of his life so far unable to eat or drink by mouth are now fundraising to get medical treatment for him in the US – so he can finally achieve his dream of tasting food and drink.

Abu Bakr Andersone was born with a host of health issues, including a hole in his heart which meant he had to be born via an emergency C-section in the Coombe at 46 weeks, weighing only two kg.

The young boy had to undergo heart surgery in Children’s Health Ireland, Crumlin, at three-months-old, such was the severity of his symptoms.

Abu Bakr’s mother, Aija Andersone, told The Echo: “For the first year of his life, Abu Bakr was all the time in the hospital, non-stop.”

One of the young boy’s most persistent health issues is an inability to eat or drink, which is a constant cause of concern for his parents, Aija and Faisel.

“When he was born, we didn’t have an explanation for why he couldn’t eat or drink,” said Aija.

“Then when he was in hospital in Crumlin at five-months-old, we found out that he had silent aspiration so food would go into his lungs without him coughing any of it up.”

Instead, Abu Bakr would usually gag and couldn’t swallow. He was also unable to be breastfed. He has now been tube fed for most of his life.

However, he has one younger sister and an older brother and meal times at the family home in Walkinstown are always a challenge, as Abu Bakr understands that others eat but he cannot participate.

“I think he doesn’t understand because he’s still putting food in his mouth, like yogurt, but then he pushes it out with his tongue – something is stopping him,” Aija added.

“It’s very heartbreaking, because there’s no answer for why he can’t eat, and it’s painful when his younger sister is eating and he’s standing beside her saying ‘om, om’.”

Abu Bakr has also been diagnosed with autism and a global developmental delay, which means his mother, Aija, has now become his full-time carer as he is non-verbal and needs constant support.

“He can’t be left alone for a minute, because he can’t ask for help if he needs it,” Aija explained.

“We feed him with a tube ten times a day.”

Abu Bakr’s parents are unable to ascertain if their son still has silent aspiration – as, at his age, the tests for it would require him to eat food – or if there is another root cause of his difficulties.

The Andersones recently became aware of another child from Ireland with similar symptoms, who attended the NAPA (Neurological and Physical Abilitation) Center in Boston and successfully received treatment.

The Andersones have decided to crowdfund for their son to receive treatment Stateside at the NAPA Center, as the same treatment isn’t available here.

The NAPA Center did hold pop-up clinics in Ireland last year, which the Andersones applied for but unfortunately weren’t selected for, so they’re now hoping to travel to the clinic in Boston.

“They have a machine for checking your swallow, and you don’t need to eat for it to work, it will just check his swallow and how it works, for five-days-a-week, three-hours-a-day, for the three weeks we’re there.”

For the last two years, Aija and Faisel have attended the Jobstown Family Centre, based in the Mary Mercer Health Centre in Tallaght, for support.

Mark Murray, an outreach worker from the Jobstown Family Centre, described the couple as “simply fantastic and resilient people”.

“Against all odds, only receiving a council house this year, they have continued to strive and relentlessly work very hard to support their son.

“This struggle has resulted in their son achieving some developmental milestones, never anticipated by some medical professionals.

“However, he still cannot eat or drink by mouth at seven-years-old, and no support in Ireland can help rectify this issue.”

The Andersones are hopeful that Abu Bakr will finally be able to join his siblings and ingest food by mouth for the first time, after receiving treatment in the NAPA Center.

“It would be a huge help if we can raise the money,” Aija said. “I haven’t been able to work for the past seven years, because I’m Abu Bakr’s full-time carer.

“It would be a dream to finally see my son eat by mouth, and for him to understand what it’s like to taste food.”

To donate to the GoFundMe, titled ‘I just want to eat by mouth like others…’, visit HERE.