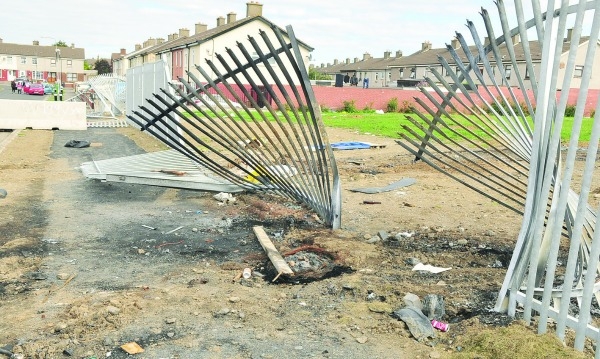 Council denies criminals were hired as security for Ballyfermot site

The site was destroyed earlier this month by joyriders, and council staff were intimidated and threatened by youths, as they attempted to remove a burnt-out stolen car.

In a statement to The Echo, DCC said: “Dublin City Council has not hired any security provision for the rapid-build housing site. Responsibility for security on this site rests with the contractor.

“Management are also advising our housing department that we should ensure the city council is not complicit in any way with the decisions pertaining to security that may be made by the contractor.”

Fed-up residents have hit back at the high level of joyriding and intimidation by known criminals bedeviling the estate.

One local resident said “The council won’t enforce anti-social behaviour on tenants, and the police won’t police the area. We need our voice to be heard.”

People Before Profit Councillor Hazel Norton, said she would be surprised if the 24 modular homes are built at this stage, such are the problems facing the site.

“It looks a bit murky at the moment – I don’t think anyone could have planned for the amount of robbed cars in recent weeks,” said Cllr Norton.

“I’ve heard claims of people being employed locally, and asked the council for more clarification on the security licence.

“Myself and Brid Smith received assurances that boulders would be put in, but we got confirmation that fencing was being put back up, while the recent area meeting was in session. There are issues in Cherry Orchard with cuts to community projects, and only one shop in the area.”

Cllr Norton continued: “I had an emergency motion in, asking for gardaí to consult with the residents over the installation of planned CCTV.

“People who are causing trouble know where the blindspots are, but if the CCTV is put in right, they could be effective.”

NEWER POSTAn opportunity to walk in the shoes of others
OLDER POSTLy Garden, Sunflower and Food Inn to battle it out for Best Spicebag Award