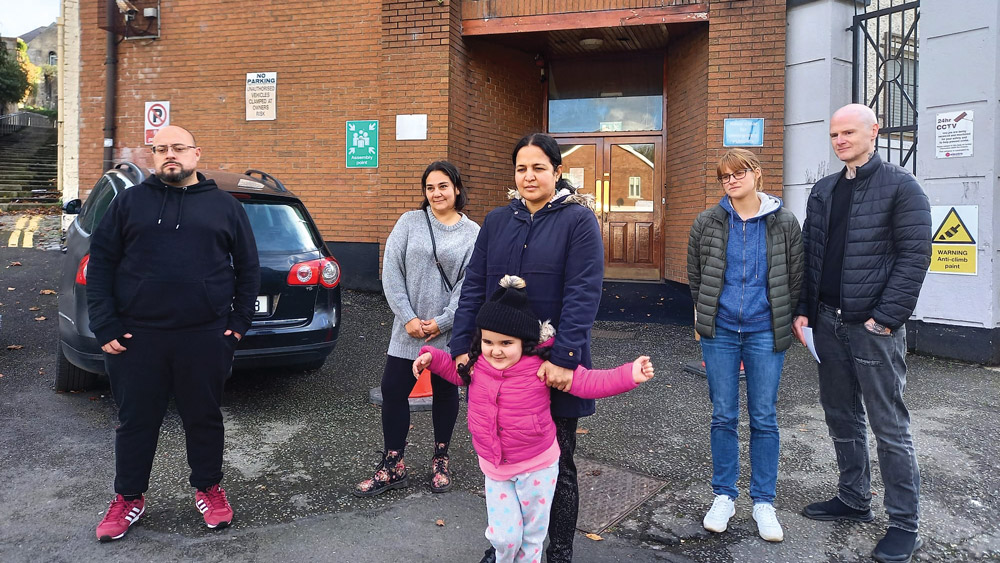 Councillor Johansson with other residents outside Tathony House

Councillor is one of 100 facing eviction from apartment block

A COUNCILLOR is one of about 100 residents facing eviction from an apartment block in Kilmainham.

North Clondalkin/Palmerstown Cllr Madeleine Johansson (PBP) has been renting an apartment in Tathony House with her husband since 2009, but says they are facing becoming homeless in June next year.

“It’s a very surreal situation to be in, I’m used to helping others fighting eviction and now I have to fight for myself,” said Cllr Johansson.

“Me and my husband are the victims of Fianna Fáil and Fine Gael’s failed housing policies. We were on the housing list for six years, then we changed jobs and got kicked off the list because our income was too high.

“Then my husband lost his job and we had to go back on the housing list. We can’t qualify for a mortgage and we can’t afford to pay the rents that are being charged at the moment in Dublin. I know so many others who are in the same situation as us, and it makes me so angry.”

Tenants at the 35-apartment block in Kilmainham, received eviction notices last week, with the owners putting the residence up for sale.

The flat complex is owned by Tathony Holdings Ltd.

“The owner is selling the building and is claiming exemption from the Tyrrellstown Amendment which was introduced to stop mass evictions,” said Cllr Johansson, who is organising tenants to take a case to the Rental Tenancies Board.

“We are not going to give up without a fight. We believe that the block should be purchased by Dublin City Council or an Approved Housing Body, like what happened in Leeside in Cork, so that all tenants can stay here and not have to face homelessness come June next year.

“We have people from all walks of life living here, single mothers, families and even pensioners.

“Everyone deserves the right to a home and no one should be forced to leave.”