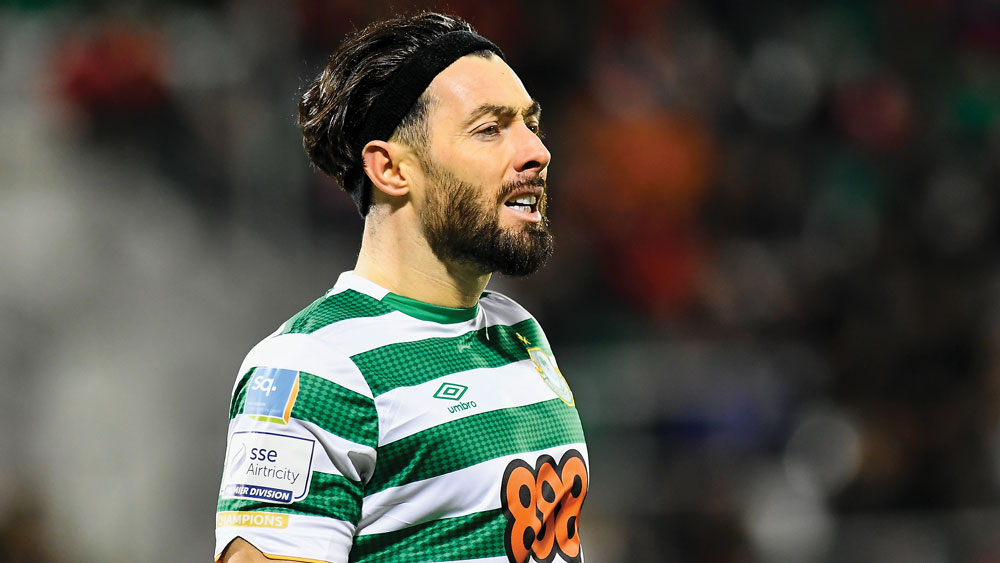 Richie Towell registered a shot on target after being played in by Neil Farrugia, but it was not meant to be (File image)

SHAMROCK Rovers European dream has come to a close, with 0-1 defeat at the hands of Djugarden in Sweden on Thursday, leaving them rooted to the bottom of their Europa Conference League group.

After first trying to qualify for the Champions League and Europa League before reaching the Conference League, the Hoops have enjoyed a 14-game run in Europe this season.

Stephen Bradley’s side suffered four defeats throughout the group stages and registered a pair of home draws to conclude, ultimately not qualifying for the knock-out stages as a result.

On Thursday night, Djurgardens took the lead through a Magnus Eriksson effort after 18-minutes at the Tele2 Arena in Stockholm.

Leon Pohls made his European debut for the Tallaght outfit and was called into action several times to keep his side in the occasion.

The Hoops did come close, Rory Gaffney hitting the side netting and Richie Towell registering a shot on target after being played in by Neil Farrugia, but it was not meant to be.

While Rovers’ European adventure has come to an end, just participating in the Europa Conference League yielded massive profits with the club securing a €3.3m windfall for reaching the group stages.

A win in any of their six group stage games would have earned Rovers an additional €500,000.

A draw could have earned them €166k, while qualification to the knockout stages results in a €300k bonus for teams on top of additional placement earnings.

A scoreless draw with Djurgarden in the opening round and 1-1 share of the spoils with Gent in the penultimate round, following a Rory Gaffney goal, sees an extra €332k in bonuses en route to Tallaght.

Between the two draws and qualification for the group stages, Rovers has grossed around €3.6m overall for taking part in the Europa Conference League.

Meanwhile, in Tallaght, work on the new fourth stand at Tallaght Stadium is progressing well and is due to bring capacity up to around 10,000 by the end of July 2023 – following an investment of around €11.5 million.

NEWER POSTCouncillor is one of 100 facing eviction from apartment block
OLDER POSTNature on our doorsteps: Beech trees in autumn