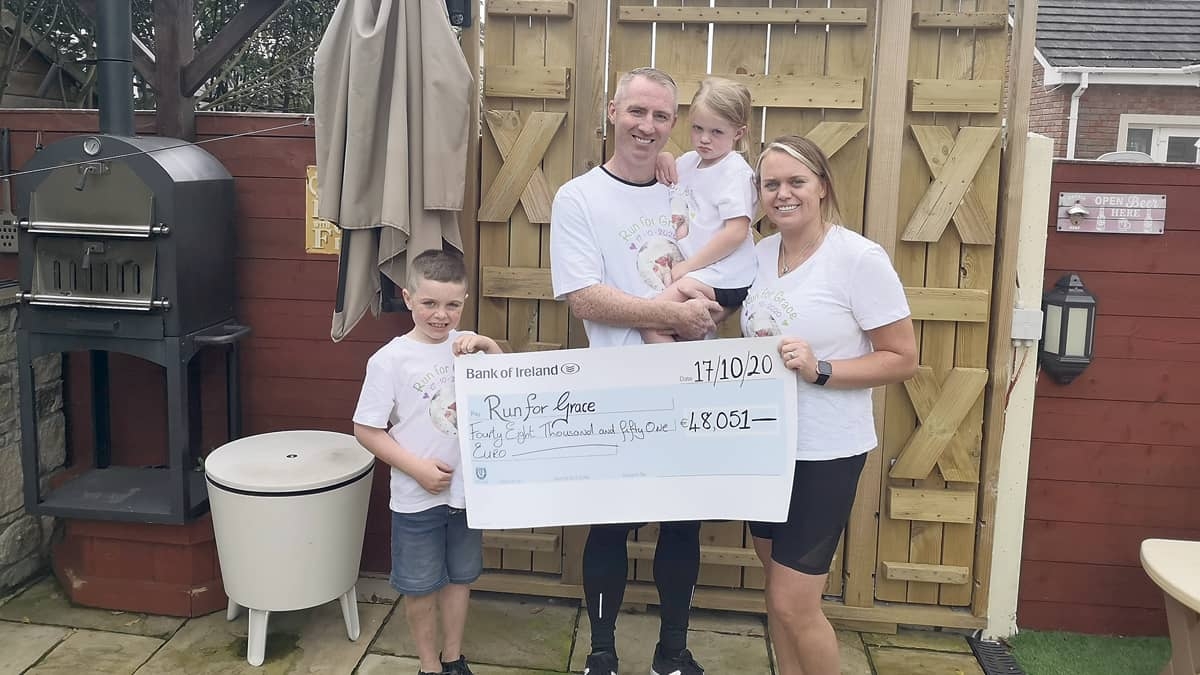 Couple raise €48,000 for the Coombe in memory of Grace

A HUSBAND and wife team raised over €48,000 last weekend after jogging and cycling 30kms from their home in Rathcoole to the Coombe and back to raise funds for the hospital, in memory of their daughter Grace, who was stillborn at 22 weeks last June.

Their children, Josh (6) and Katie (4), couldn’t wait to meet their new little brother or sister.

However, when Louise attended her 20-week scan in June, their baby was sadly diagnosed with a rare condition called triploidy – a chromosomal disorder which causes most affected infants to be miscarried or stillborn.

Louise’s waters then broke on June 15, and little Grace Esther Ryan was stillborn later that week, on June 20.

The Ryans decided to fundraise for the Coombe and Féileacáin – the Stillbirth and Neonatal Death Association of Ireland, following the loss of Grace, in recognition of the support they received from them, and they wanted to mark Grace’s due date of October 19 in a positive way.

The couple and a small group of their friends set off on a 30km challenge last Saturday – with Gary running 30kms while Louise cycled the same distance – to raise funds for a ventilator for the Coombe, and for Féileacáin to continue their services, in memory of their little girl.

“To be honest, holding the event helped us as it was the weekend of Grace’s due date, and we should’ve been going to the hospital for a different reason,” Gary told The Echo.

“We were drained, because Louise doesn’t cycle a lot and I don’t run a lot, but it was brilliant.

“And it gave us some peace to know that the ventilator will be a lifeline to other people’s lives.”

A total of €48,051 was raised for the Coombe as a result of Gary and Louise’s challenge, and the couple hope that talking so openly about their experience will help to break down the stigma around babies who are stillborn or miscarried.

“There’s a stigma around the loss of an infant, people tend not to talk about it,” Gary said.

“Although we were sad when Grace was born, we were also very proud and happy about how far she got.

“When we lost Grace we were still very happy that she’d made it that far, and it’s okay to feel that way – people shouldn’t feel ashamed of that.

“Even if your baby only lived in its mother’s womb, they’re still your child.”

They’re proud that Grace’s legacy will carry on through the Coombe’s new ventilator and also through the additional funding boost for Féileacáin as a result of their fundraiser.

“Our biggest concern was making sure people would remember Grace,” Gary added.

“Obviously we knew that we’d never forget Grace, but we wanted other people to remember Grace too, so that she’s never forgotten.”

NEWER POSTStories from the Frontline: We hope the Goodies were of benefit to members of RAMS and Newcastle ladies
OLDER POSTThis week’s front pages – 29th of October 2020