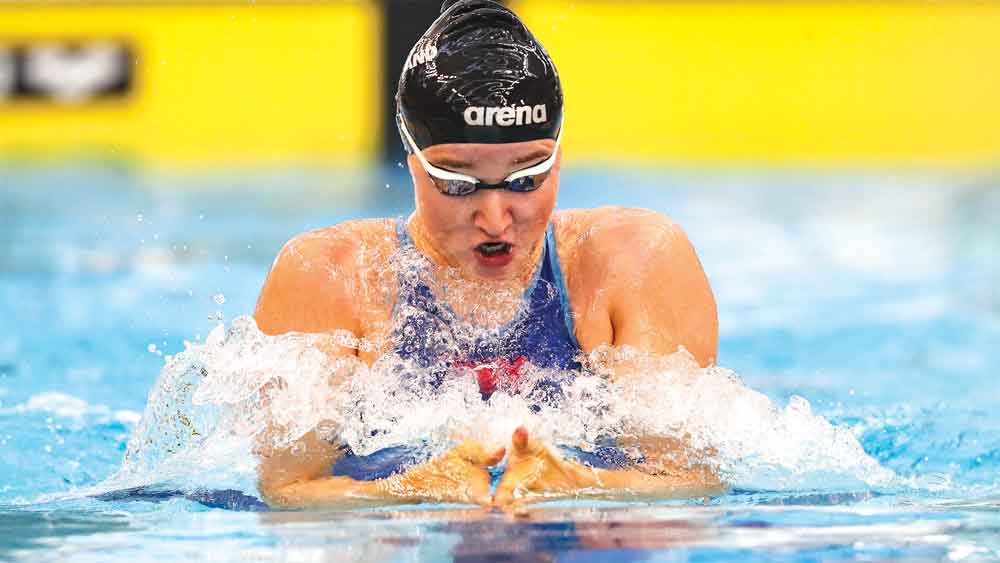 TALLAGHT native Niamh Coyne enjoyed a big impact at Swim Ireland’s Irish National Winter Championships at the National Aquatic Centre last week as she claimed medals across all three days of the competition.

Still just 21 years of age, Coyne – who operates out of the National Centre Dublin, where she is coached by Ben Higson – found herself up against Molly Mayne in the 100m Breastroke final last Thursday.

There is normally little to separate her from the Templeogue swimmer with Coyne narrowly edging out Mayne in the 200m Breaststroke decider at the Irish National Team Trials at the same venue in April 2021.

It proved to be a similar case in their latest bout with less than a second separating the two competitors.

Coyne came home in an impressive time of 1:06.87,but had to settle for a silver place finish in the end.

Nevertheless, Coyne had shown that she was in good form and once again found herself in direct competition with Mayne in Friday’s 200m Breaststroke showpiece.

Whereas it was just the two of them in the pool for last year’s national team trials in the same category, it was a much larger field on this occasion.

In the end, it was the accomplished Mayne who came through to earn the gold medal in the category. Coyne was involved in an interesting battle with Ellie McCartney for silver and her finishing time of 2:26.74 was agonisingly shy of the 2:26.50 recorded by her Enniskillen counterpart.

Yet Coyne still achieved a podium finish for a second day running and had another performance to celebrate on the Championships’ final day of competition on Saturday.

In the 50m Breaststroke final, a time of 31.30 was enough to earn Coyne a gold medal to go alongside the silver and bronze she had accumulated on the previous days.

The past few years has seen Coyne making steady progress in the world of swimming.

She competed in the Women’s 50m Breaststroke at the 2019 World Aquatics Championships in South Korea and was close to making the final cut for last year’s delayed Summer Olympics in Tokyo.

Going back further to 2018, Coyne picked up a silver medal for the 100m Breaststroke at the Youth Olympics in Buenos Aires.

Finishing 1.02 seconds adrift of gold medal winner Anastasia Makarova, Coyne defied her own expectations in claiming second spot over in the Argentinian capital.

More recently, she won the B[1]Final of the 100m Breaststroke at the 2022 US Open Swimming Championships in Greensboro – coming home in a time of 1:09.49.

Like Templeogue’s Ellen Walshe, she will be eligible to compete at the inaugural LEN European U23 Swimming Championships that are due to be held at the National Aquatic Centre from August 10-13 of next year.

Aside from that event, it promises to be a productive 2023 for the Tallaght woman with a number of meets set to come on her radar.