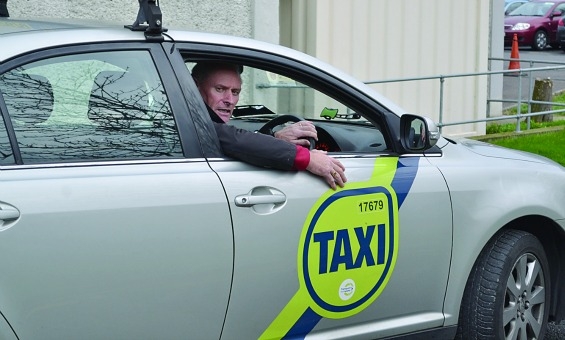 TAXI drivers are losing between five and nine litres of fuel a day due to the removal of taxi ranks across the city – a serious environmental issue which a Tallaght father-of-five is raising with Government.

Living in Kingswood, taxi driver Tony Rowe, who is the spokesperson for taxi drivers on the National Transport Association Committee, has claimed that more than 30 tonnes of fossil fuel are being wasted every day in the capital, as an average of 13,000 taxis are forced to stay on the road due to a lack of taxi ranks.

Tony told The Echo: “Taxi ranks are being closed at an alarming rate and because of this drivers have nowhere to park and are forced to keep driving around the city streets.

“We surveyed more than 500 taxi drivers and discovered that drivers are losing between five and nine litres of fuel every day, which equates to a total loss of around 30 tonnes of fossil fuel daily – just by taxi drivers.

“Besides drivers losing money and working extra hours to cover costs, this is causing a serious ecology issue in Dublin city – and it flies in the face of all the conservation efforts being done.

“Thousands of taxi drivers on the roads of Dublin city also significantly adds to congestion problems.”

He added: “This situation is easily addressed and we have identified a number of sites that would be suitable for taxi ranks.

“However, no action has been taken by Government and ranks continue to be closed down – with the landmark rank at the top of O’Connell Street also earmarked for closure.

“We are getting calls from taxi drivers every day on this and members of the public, especially older people and wheelchair users, who are being greatly inconvenienced by the closure of ranks.

“There’s only 500 full-time spaces for taxis in the city centre, it’s just lunacy.”

The NTAC has made representations to Government and also to the European Commission and the Council of Europe.

When contacted by The Echo, the Department of Transport passed the query to the National Transport Authority (NTA), which did not reply to The Echo in time for print.

The Department of Transport did say that a number of the ranks are being removed to facilitate the extension of the Luas and that some will be relocated.

However, local drivers have refuted this, claiming that ranks have been closing down right across the city.