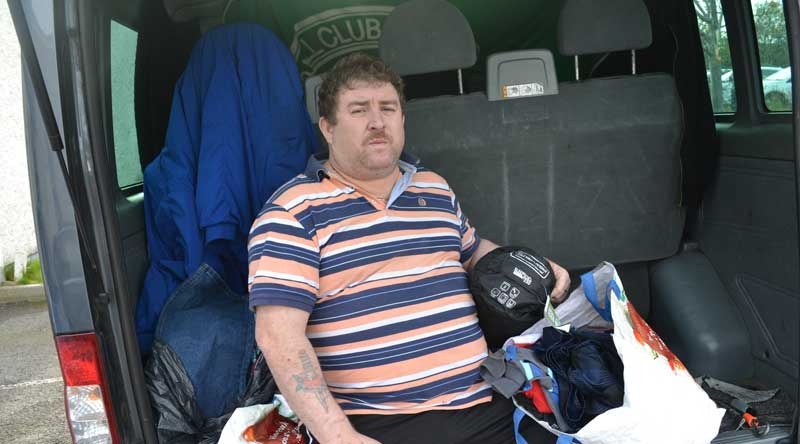 Dad’s shame at sleeping rough in back of his van

Mr Macken, originally from St Dominic’s estate in Tallaght, said he is registered as homeless with South Dublin County Council.

Mr Macken said: “I’m a taxi driver for 16 or 17 years, but I can’t work because I’m sleeping rough in it. I’m sleeping between hostels. Sometimes [the council] have no bed for me.

Mr Macken, who has two sons aged nine and 11, spoke about the shame of being woken up by his son while he was parked near his former partner’s home and sleeping in his taxi.

He said: “A couple of weeks ago, I was down in Pimlico and me son woke me up. Nine years old. It broke my heart.

“I parked around the area where they live and he came and knocked on the window and he woke me up.”

He previously stayed in the Coolmine residential centre in Blanchardstown from December to March of this year to address his problems with substance abuse.

However, according to the father-of-two, the stress of trying to find a suitable hostel to sleep in for the night, or alternatively having to sleep in his taxi, caused him to relapse and abuse cocaine.

He admitted to refusing to stay in particular hostels in the city centre that he found too dangerous, saying: “The council wants me to go into a place that I know is a danger to me.

Despite being eligible for the Housing Assistance Payment (HAP) scheme, which pays rent directly to private landlords, Mr Macken said he has been unable to find a landlord willing to take the payment.

He said he hoped that he would find appropriate accommodation in order to maintain a sober life: “I want someone to do something. I want the council to accommodate me with something to survive in. To get my life back the way it should be.”