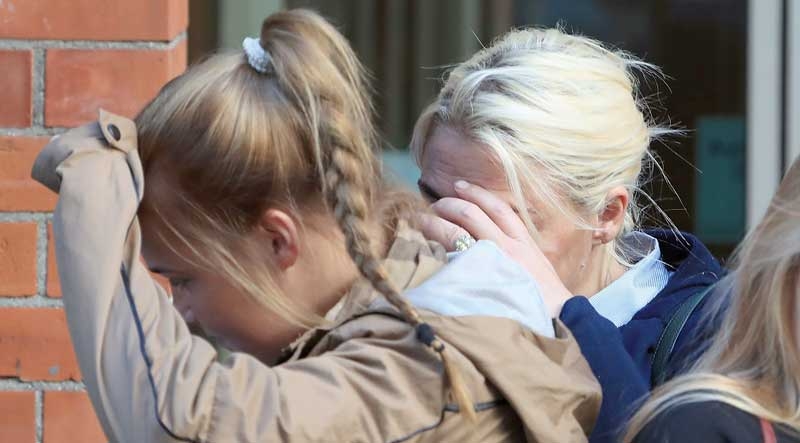 The children of a criminal shot dead in his home told how a man holding a gun entered the kitchen wearing a balaclava before shooting their father dead.

Andy Connors (46), of the Old Pound, Boherboy Road, Saggart, Co Dublin was buried in a gold-plated coffin after he was shot in front of his family on August 19, 2014. His wife Ann Connors, four of his six children, and a niece, were in the house at the time.

One of his daughters told how she was pushed to the ground by the gunman who entered the house through the back door into the kitchen shortly before 11 o’clock that night.

“A man came to the door wearing a black balaclava, bullet-proof vest and black gloves. He walked in the door. He grabbed me and pushed me to the ground. He had a gun in his right hand,” the child said in her deposition, read out at Dublin Coroner’s Court. Family members wept as the details of Mr Connors’ violent killing were recounted.

“Daddy didn’t make it to the hall, he shot him. Then he walked out of the house and drove off. I went down the hall and saw mammy holding daddy,” Miss Connors said.

Mr Connors had been ‘in good form’ earlier that evening according to neighbour Keith Brennan.

“He was 100 per cent flying and in good humour. He didn’t mention any threats,” Mr Brennan said.

The pair had a few drinks at a pub in Monasterevin before returning to the Connors’ home in Saggart around 10pm. Detective Garda Con Harrison said access to the ‘substantial dormer bungalow house’ was gained through ‘substantial’ gates. Andy Connors asked his daughter to make him a cup of coffee and had gone to his bedroom to change his clothes when the gunman entered the house, the court heard.

Another daughter said she was playing with transformers in the bedroom when she heard a scream from the kitchen. She described the gunman holding what she thought was a Mac 10 machine gun in his right hand.

“He shot my daddy six or seven times. My daddy fell back onto my mammy. The man walked out,” she said.

A 999 call was made at 10.55pm. Mr Connors was unresponsive when gardai and paramedics arrived at 11.09pm. He was rushed to Tallaght Hospital where he was pronounced dead at 11.58pm.

The cause of death was gunshot wounds to the chest according to state pathologist Professor Marie Cassidy. Andy Connors’ widow Ann Connors asked the coroner if there was anything the family could have done to save him.

“There was nothing you could have done,” the coroner said.

Detective Inspector John Walshe of Tallaght Garda Station said gardai had explored 299 lines of inquiry, taken 161 statements and arrested one person as part of the investigation. A file was sent to the DPP, but there has been no prosecution in relation to the killing. The investigation remains open, Det Insp Walshe said. The jury at the inquest returned a verdict of unlawful killing by person or persons unknown.