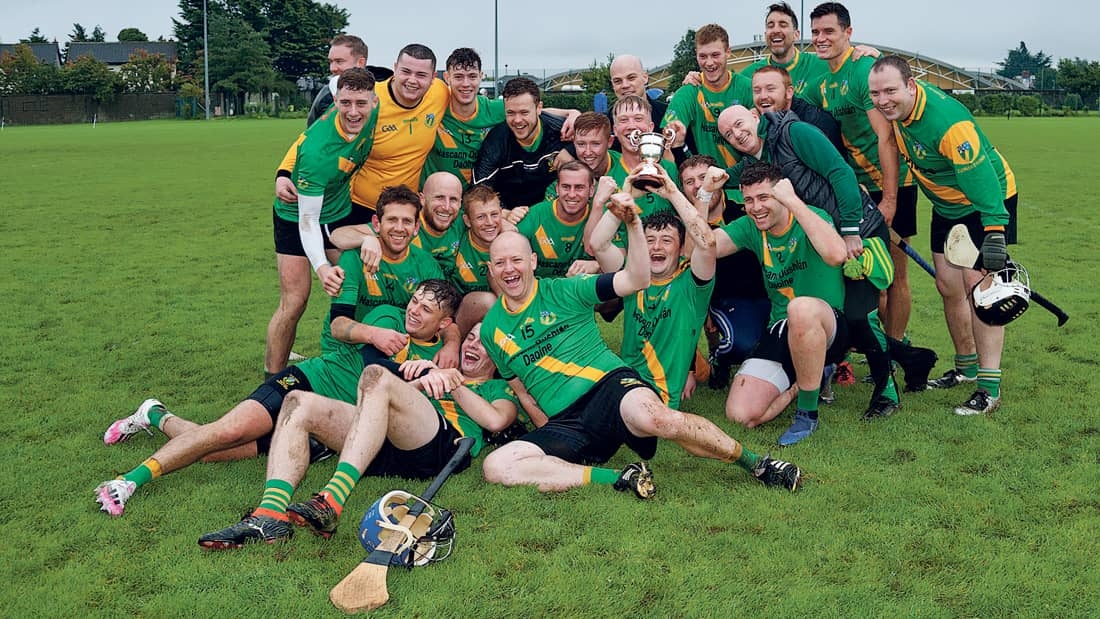 The Tallaght men made light of the testing conditions to secure top honours in a compelling encounter with St Vincent’s.

The superb performances of John Sinnott and Eoin Kirby went a long way towards ensuring their win -the attacking pair combin-ing for a haul of 2-7.

Wing-back Luke Dempsey was another player to stand tall, while goalkeeper Ben Rogers and  Stephen Bates also made telling contributions.

Credit must go to their opponents, St Vincent’s, who reduced their arrears to a single point in the closing minutes having looked dead and buried either side of half-time. Full-forward Thomas Russell was their main source of inspiration, registering six points.

Yet, when push came to shove, Davis’ discovered an extra gear to get themselves over the line.

An impressive 5-16 to 3-9 victory over Ballyboden St Enda’s in the semi finals after topping Group One meant confidence was sky high heading into this showpiece affair.

In a fast opening to proceedings, Sinnott and Luke Dempsey (free) pointed after half-forward Michael Callinan had broken the deadlock for Vincent’s.

Though Davis’ received a hammer blow in the form of a Callinan goal, Sinnott produced an unstoppable finish of his own in the seventh-minute.

Subsequently, Russell’s maiden point of the tie was cancelled out by another monstrous Dempsey free to give Davis’ a slender cushion at the first half water break (1-3 to 1-2).

John Kinsella and his opposite number Russell proceeded to trade scores only for the Kiltipper side to create further daylight through Kirby and Dempsey. Corner-forward Liam Burns got Vins back on level terms when he angled a speculative shot into the roof of the net, but this was a minor speed bump for Davis’.

Best known for his exploits with the club’s senior footballers, Kirby was fast turning into his side’s go-to attacker. His quickfire 1-1 salvo was supplemented by a Michael Small free to move Thomas Davis 2-8 to 2-3 ahead at the midway juncture.

The gauntlet had well and truly been thrown down to Vincent’s and it was up to them to produce a swift reply on the resumption. They certainly were not lacking in endeavour but, with team captain Aaron Rafferty marshalling the Davis’ defence, the northsiders found scores hard to come by.

Davis’ were that bit more clinical in front of the posts and with Sinnott and Kirby enlarging the gap to seven points, they looked set to ease over the line. However, Vins were not prepared to go down without a fight.

Russell converted a ’45’ to finally get them up and running in the second half and the same player was on target inside the closing-quarter. This gave Vins sustained momentum for virtually the first time in the contest and with substitute Conor Casserly adding his name to the scoresheet it was very much game on.

Russell fired over a brace to make it a one-point game, but this was as close as the Pairc Naomh Uinsionn outfit came to the big prize. Sinnott settled Davis’ with a close-range free and turned provider for a John O’Donovan effort in the 59th-minute.

Given how well he had performed throughout, it was fitting that Kirby rounded off the scoring deep into stoppage-time. Pouncing on a short clearance, he posted a magnificent point to ensure the spoils for Davis.