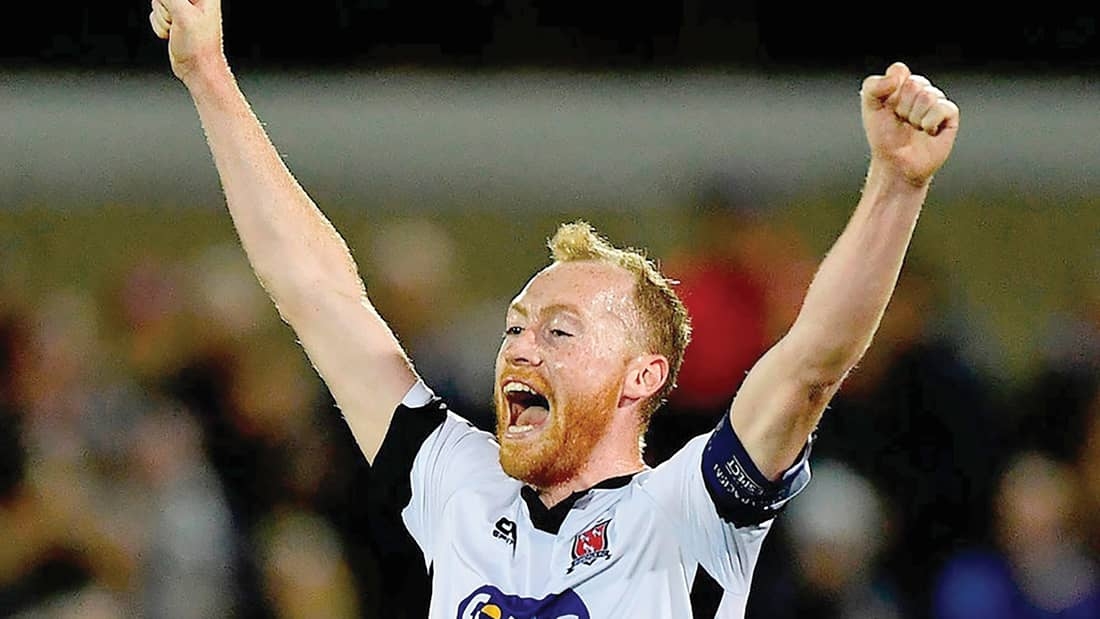 Shields relishing chance to mix it with European giants

DUNDALK’S Chris Shields is relishing the prospect of returning to the Europa League group stages after the Lilywhites prevailed in last week’s playoff against Faroese outfit KI Klaksvik at the Aviva Stadium.

The reward for Filippo Giovagnoli’s men was a place in Group B that will feature a mouthwatering meeting with Premier League giants Arsenal as well as match-ups against Rapid Vienna and Molde.

For Clondalkin man, Shields, it marks a much anticipated return to the big-time of European football, something of which he was an integral part the last time the Louth side competed on this stage back in 2016.

Indeed, under then manager Stephen Kenny, the team made history in this phase of the competition, producing a stunning start to their Group D campaign at the time by firstly drawing with AZ Alkmaar in their opener after which they then served up a 1-0 defeat to Maccabi Tel Aviv.

And Shields is hoping they can again make their presence felt among some of their big names of European football.

“It’s brilliant to be back in the group stages” he told The Echo. “Once you get a taste of that like we did, you just don’t want to give it up.

“Obviously the glamour tie is going to the Emirates to play Arsenal. It’s going to be a proud moment leading the team out for that.

“But you look at the other two games against Rapid Vienna and Molde and we’ll be wanting to be getting points there.

“There’s a great group there. We’ve got players there with experience and ability and youth coming through.

“Darragh Leahy has been exceptional for us in Europe this season and he was selected for the Republic Ireland Under 21 squad.

“The last time we were in the group stages people expected absolutely zero from us and after two games we were second in the group.

“So it just shows you how things can change and we won’t be going there to just make up the numbers. We got great experience playing in the group stages in 2016.”

Suspension had ruled Shields out of the play-off clash with KI Klaksvik last week, but he was proud of the efforts of his team mates in taking that final step into the group stages.

Goals from Sean Murray, Daniel Cleary and Daniel Kelly propelled the Airtricity League champions to a 2-1 victory over the battling visitors.

“We knew it was going to be hard to break them down, but getting the first goal and then going two-up so early in the second half was just a dream” said Shields.

“They [Klaksvik] stepped up the pressure and it looked like we might concede and that’s what happened, but thankfully we got through.

“Like any play-off or cup final, it’s all about the result and we got that” he said.