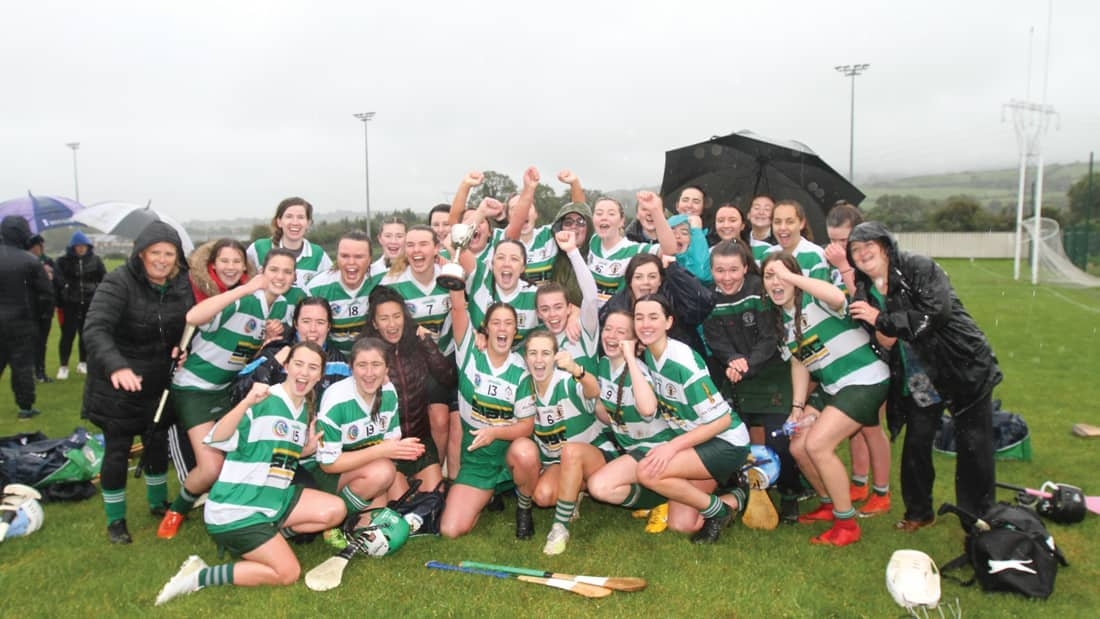 ROUND Tower Clondalkin produced a superb display in a rain-soaked Bohernabreena on Sunday to secure the Dublin Junior Four Camogie Championship title at the expense of a gallant St Anne’s.

Full-forward Róisín Ní Dhonnagáin led the way for Towers with an impressive haul of 2-1, while Kate Whelan (1-2), Zoe Barnwell (1-1) and Emma O’Malley (0-3) also made strong contributions over the course of the contest.

Megan Hoyte of Round Tower in action against Gillian O'Reilly of St Anne’s while Photos by iLivephotos.com

Amidst treacherous conditions, netminder Karla Meehan superbly marshalled her defence and offered up a calm presence between the sticks.

On their home patch, Anne’s were never less than resilient and remained in contention until a late blitz by Towers eventually sealed the deal.

The central attacking axis of Jacinta Purcell and Kerry O’Neill amassed a combined tally of six points, supple-menting a goal apiece from midfielder Shona O’Connor and inside forward Megan Doran.

Towers had booked their spot in this decider with a comfortable semi-final triumph over Ballyboden St Enda’s on September 20. Seven days later, Anne’s had a penultimate round success of their own against Faughs Celtic.

Despite having to be played behind closed doors, the latter were more than pleased to be given home advantage for this showpiece tussle. Although they conceded an early point to Towers centre-forward Emma O’Malley, it was an encouraging start to the action for Anne’s.

The raiding O’Connor tested the resolve of Meehan with a close-range strike. The Towers custodian stood up to the mark, before O’Connor cut inside off the right flank to strike a clinical third minute goal beyond her reach.

This gave Anne’s a foothold in the game but, with O’Malley leading their charge, Towers settled in effortless style. After Lucy Cullen and Holly Gregg pointed to bring them back on level terms, O’Malley edged the Clondalkin outfit into the ascendancy with a well-worked score.

At the opposite end, O’Neill signalled her threat by conjuring a brace of goal opportunities that she narrowly missed. Having weathered this storm, Towers subsequently doubled their lead with a Zoe Barnwell point on the run.

While they suffered a further set-back when Doran squeezed home a shot at a tight left-hand angle, the visitors were the dominant force in the closing stages of the opening period.

The increasingly prominent Róisín Ní Dhonnagáin grabbed two goals in the space of three minutes to bolster the Towers’ challenge.

O’Neill (two) and Sadhbh Peelo kept the scoreboard ticking over for Anne’s but, thanks to additional efforts from O’Malley, Whelan and raiding centre-back Yazmin O’Neill, the hosts were five points adrift (2-8 to 2-3) at the interval.

Their battling qualities were on full display after the resumption and though the Towers rearguard was generally holding firm, Purcell converted a free on 39 minutes to keep their championship dream alive. A similar score by Whelan kept Towers in the driving seat, but a two-point salvo courtesy of Purcell increased the tension moving towards the final-quarter.

Yet, just before the commencement of the second half water break, Towers received a major psychological boost. Shooting from a distance of 21 metres to the right of the posts, Whelan floated a deceptive free past opposition goalkeeper Mary Jane McKeever.

This provided Towers a six-point buffer (3-9 to 2-6) with just under 15 minutes of normal time left to play. Nevertheless, Anne’s refused to throw in the towel and the pacy O’Neill split the uprights at the end of a blistering solo run.

However, Towers were not to be denied their victory. Following a barren spell for both teams, Ní Dhonnagáin added a fine point out towards the left-wing.

If there was still any doubt surrounding the destination of the silverware, it was finally put to bed when Barnwell’s speculative shot from distance produced a fourth Round Towers goal.