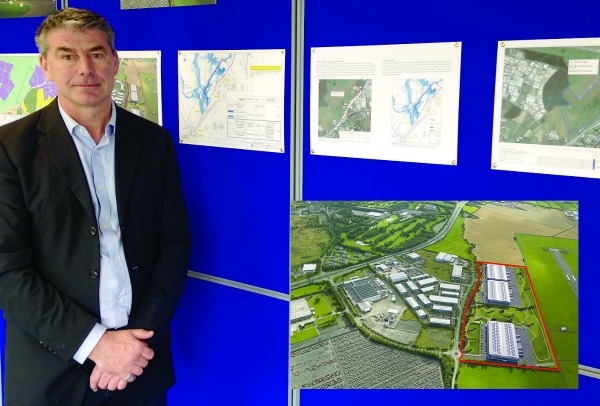 THE outcome of a council meeting next Monday could possibly sink or keep afloat the proposed development of a €30 million logistic park in Baldonnell, which promises to bring 1,000 jobs into the area.

As reported in The Echo last June, Mountpark Logistics EU announced that it was poised to invest €30 million into the creation of a state-of-the-art logistics and industrial hub on a 35-acre site that the UK firm purchased in Baldonnell Business Park.

According to Mountpark, the proposed development has the potential to create up to 120 jobs during the construction phase and just under 1,000 jobs when complete – with the council in line to reap €2.4 million in developer fees and €430,000 annually in rates.

Last October, a planning application lodged with South Dublin County Council for the development of the logistics park, which includes three industrial and logistic units, was refused by county planners – on grounds that the proposed development would take place within an “identified floodplain” and that planning permission would contravene council policy that requires such a development not be permitted.

The decision has since been appealed to An Bord Pleanála, with the planning authority due to make a ruling by August.

Mountpark’s site is part of a larger plot of land which has been the subject of much debate during the council’s review of the draft County Development Plan 2016 to 2022 – after the land was identified as a flood risk, following a report from the Catchment Flood Risk Assessment and Management (CFRAM).

According to South Dublin County Council, councillors – at the last stage in the review of the County Development Plan – voted in “favour of rezoning these lands from Enterprise and Employment to Rural on the basis that the lands were subject to the risk of flooding”.

A final decision will be made by councillors this Monday, May 16, ahead of the adoption of the New County Development Plan 2016–2022 in June.

This week, Phillip O’Callaghan, of Mountpark Logistics, met with local councillors to brief them on the development’s flood risk management and mitigation measures – and to seek their support in keeping industrial zoning on the land.

He told The Echo: “We have confidence in this site and would not be investing €30 million if we thought there was a flood risk.

“This site has no history of flooding and we did extensive survey work on the Camac River and included a site-specific flood management assessment and mitigation measures as part of the planning application.

“As part of the measures we also noted that there will be no increased downstream flooding arising from the development in a flood event – and we’re also putting in preventative measures that aren’t on the land now.

“Our survey was also more in-depth than CFRAM. We surveyed the land at 50-metre intervals along the Camac whereas the CFRAM report surveyed every 500 metres.”

He added: “We don’t believe that the council’s reasons for denying permission are reasonable. We spent 12 months examining this site.

“The appeal is now with An Bord Pleanála but we met with councillors this week to ask them to keep industrial zoning on the land – keep the door open for the development.”

Clondalkin Fine Gael councillor Emer Higgins has lodged a motion for this Monday’s council meeting, which seeks that the zoning on the land be retained to “allow for enterprise and employment”.

However, Anti-Austerity Alliance councillor Mick Murphy told The Echo: “There is no question here, this land should not be developed.

“A significant flood risk has been identified and the council is just following procedure in de-zoning the land.
“This is the third time this has been up for discussion in council chambers, it’s frightening that it’s been brought up at all.”

He added: “There are also no jobs at risk here, there is plenty of land across the county for development.”

According to Cllr Murphy, AAA has organised a protest outside the council this Monday at 3.30pm over the zoning of lands identified as flood risk.

Sinn Féin councillor Cathal King, who is supportive of industrial zoning on the land, told The Echo: “In October 2011, half of Tallaght flooded and this area didn’t.

“I understand the concerns around flooding, but a flood mitigation has been carried out and the development will reduce any possibility of flooding downstream.

“This is a perfect location for development and will bring a lot of jobs including general operatives and manufacturing into the area – the type of jobs lost in areas such as Tallaght, Clondalkin and Lucan during the recession.”

The council will discuss this site alongside 24 other motions at a County Development Plan meeting this Monday at 3.30pm.