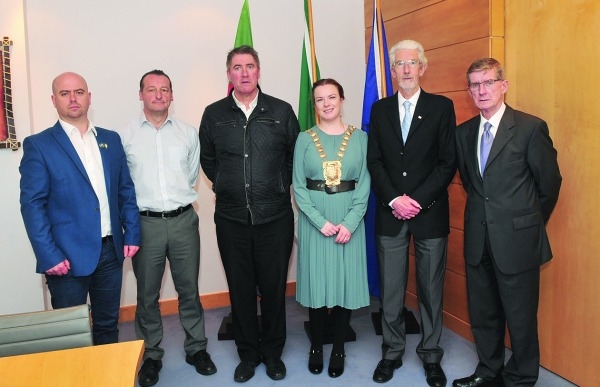 DUBLIN’s four local authorities met in Tallaght this week to collectively call on the new Housing Minister, Simon Coveney TD, to make funds immediately available for housing, with the call coming in the same week that homeless families living in hotels prepare to be moved out of their rooms to facilitate summer tourists.

South Dublin County Mayor Sarah Holland invited the Mayors of Dublin’s local authorities to meet in South Dublin County Council on Tuesday to discuss the housing crisis and sign a collective agreement calling on the Government and the new Housing Minister, Simon Coveney TD, to make funds available for housing as a matter of urgency.

Erica Fleming, a Dublin mother living with her daughter in a hotel for the past 10 months, was also invited to the meeting to give a briefing on life in a hotel.

Erica, who appeared on RTÉ’s My Homeless Family documentary, told The Echo: “I think sometimes people forget that there are families behind the statistics – that’s why I told my story on Tuesday.

“I have been living in a hotel for 315 days, that’s 315 days with no stability, no security and we’re coming into the summer now which is a very worrying and stressful time for families living in hotels.

“Tourism numbers are up over the summer and hotels need their rooms back to meet bookings, so families face the prospect of going back and forth all summer.

“Last summer, I had to find rooms in other hotels. Sometimes it was for only one night at a time and I had to pack up everything, go to another hotel for one night and then go back to my original hotel.

“I work and need some sort of stability to keep my job. I’m lucky in that I drive, but any families without a car have no hope of trying to keep their routine over the summer months – and there is the main worry that you may not find a hotel that has a free room.”

She added: “Every homeless family is feeling the exact same as me and what makes it all worse is that nothing is changing.

“I know we can’t build houses overnight but nothing is being done at all.

“We need a Government that wants to come up with solutions – and acknowledge and declare that we have a national housing emergency.”

Speaking to The Echo after the meeting, County Mayor Sarah Holland said: “There is more to the role of Mayor than cutting ribbons, so we decided to see if we could have an impact by collectively calling on the new Housing Minister to make solving this housing emergency a priority.

“Housing is the number one issue we face as county councillors, and I’m not alone in sometimes feeling that it’s like banging your head off a brick wall.

“The four local authorities have agreed a plan of action to include calling for a meeting with the new Housing Minister.”

Also present at the meeting, Tallaght South Sinn Féin councillor Cathal King said: “Not a day goes by that I don’t have a housing case to deal with.

“We have encountered difficulties in getting the money off central Government. Former Minister Alan Kelly has said several times that there are funds available, but this is not being handed over to us.

“We need a large-scale build of sustainable, mixed tenure communities.

“The new Minister needs to hit the ground running, and all four Dublin authorities will be writing to ask for a meeting as soon as possible.”