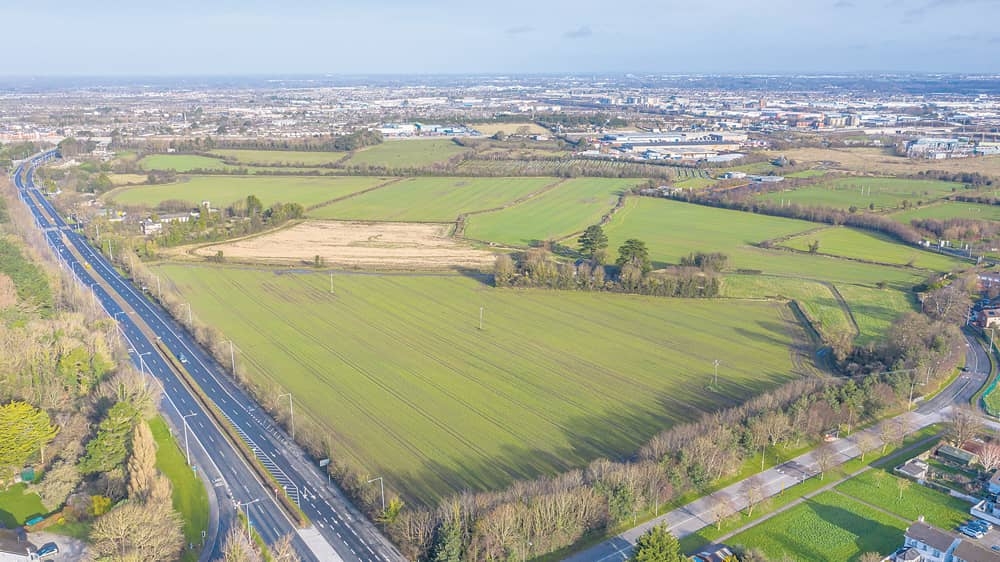 TALLAGHT residents “need not be worried that residential development at Newlands will create a density of population that is comparable to that of the Boroughs of inner London”, according to a planning consultant.

As reported in The Echo last week, local community group Tallaght Community Council claimed, by their estimation, that the proposed population density of a 3,500-unit development at Newlands Farm would be comparable to the sixth most populated borough of London, Camden.

The site at Newlands between Kingswood and Clondalkin

However, Hendrik W van der Kamp, the former Head of the Planning School in Technological University Dublin and a past president of both the Irish Planning Institute and the European Council of Spatial Planners, made a statement on behalf of Hibernia REIT about TCC’s claims.

Mr van der Kamp said: “[TCC’s] calculation is based on a density of 60 dwelling units per hectare with two occupants per unit.

“Boroughs in London include a lot more than just residentially zoned land.

“For example, the lands at Newlands are compared with the Borough of Camden in central London.

“However, in addition to residential accommodation for its population of ca. ¼ million, the Borough of Camden accommodates a large public park of 320 hectares (Hampstead Heath), as well as three busy railway stations (Euston, Kings Cross and St. Pancras), not to mention the many business and retail premises dotted throughout the area.

“The population density in Camden Borough would be a lot more than the figure quoted (12,035 per sq km) if these uses were excluded.

“In fact, the population density of South Dublin County Council at the last census year of 2016 can be calculated to be 1,250 persons per sq km (278,767 population in an area of 223 sq km): one tenth of the figure for Camden Borough.”

Mr van der Kamp, who has also been consulted by the government on a number of occasions on planning matters and was a member of advisory groups of both the National Spatial Strategy and the National Planning Framework, added: “New homes bring new people which will lead to better facilities for the residents of Tallaght.

“The zoning of residential land implies the provision of public open space, playgrounds and other facilities for local residents.

“For the residents in Kingswood for example, the zoning for residential development of Hibernia REIT’s landholding will achieve an expansion of the existing public park, new sports and community facilities, improved bus services and possibly an additional Luas stop.

“Neighbourhood shops and childcare facilities may also be of benefit.

“The zoning of agricultural land within Dublin City and Suburbs for residential development makes much sense in view of the Government Policy under Project Ireland 2040 to achieve 50 per cent of new housing within the cities and their suburbs.

“It is not likely that the landholding of ca. 58 hectares can be used in full for new homes, even if it is zoned residential.

“The readers of The Echo need not be worried that residential development at Newlands will create a density of population that is comparable to that of the Boroughs of inner London.”

According to figures provided by Hibernia, the projected population for the Newlands Farm development is 7,000, with a population density of 5,343.51 per km squared.

The Newlands Farm site is currently zoned for agricultural uses, however in order for planning permission to be considered the site will have to be rezoned for residential uses in the next South Dublin County Development Plan, for the period 2022-2028, which is currently under review.