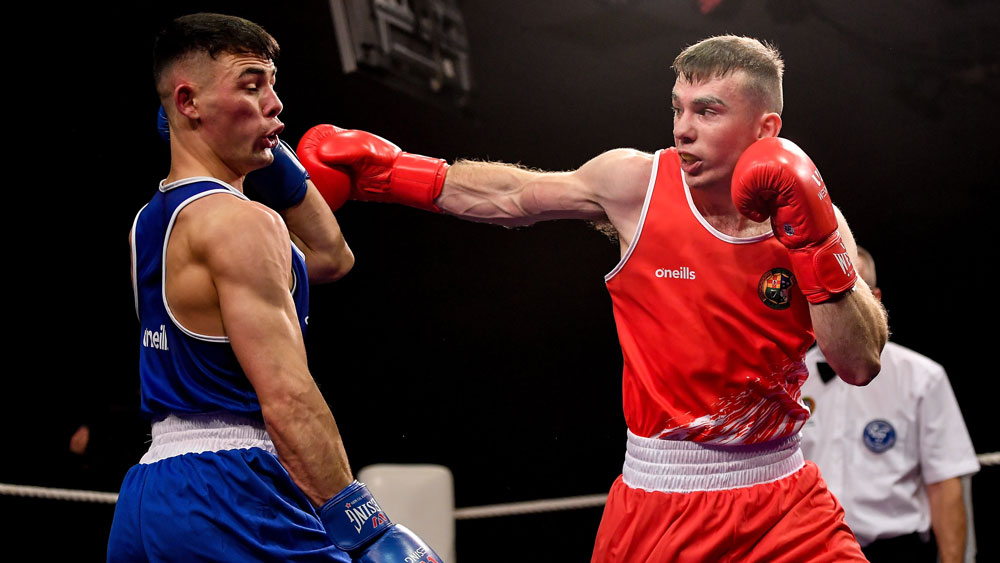 THERE was disappointment for local boxers Gillian Duffy, Kellie McLoughlin and Luke Maguire in the National Elite Championship Finals at the National Stadium yesterday, with all three fighters coming up short in their respective bouts.

Despite the absence of Olympic medallists Kellie Harrington and Aidan Walsh – as well as the latter’s sister Michaela and Brendan Irvine, amongst others – this competition offered the perfect platform for Ireland’s next generation of boxing hopefuls.

The opening eight fights were broadcast on TG4’s YouTube channel, with the remaining 13 bouts being shown on live television by the Irish-language network.

St Mary’s, Tallaght competitor Duffy was one of the first up in the 63kg final, against Eve Woods of the Corinthians club on the northside of Dublin.

Interestingly, whereas the aforementioned Harrington is now a member of St Mary’s, she began her amateur boxing career at Corinthians.

Woods set the tempo in the opening round of her fight with Duffy, landing a series of impressive shots to get herself on the front-foot.

Duffy did make life difficult for her opponent in the third and final round, but Woods ultimately took the crown in what was her maiden fight at adult level.

Drimnagh’s McLoughlin was hoping for better joy in the 57kg decider but came up against a formidable adversary in the form of DCU fighter Jennifer Lehane.

Despite having a height disadvantage, Lehane landed some excellent punches and was in the driving seat at the end of the opening round.

The remaining minutes of the fight were relatively even, with both boxers taking a measured approach in their pursuit of a championship title.

However, Lehane was awarded the fight on a unanimous decision.

In the penultimate bout of an epic fight night on the South Circular Road, Maguire – of Esker Boxing Club in Lucan – squared off with Galway’s Kieran Molloy in the 71kg division.

There was little to separate both boxers in the opening round as they looked to size each other up.

Yet, Molloy came into his own during the second round with a series of good blows and was already well on his way to securing the crown on offer.

In spite of Maguire’s best efforts – and a decent blow at the very end of the nine-minute fight – Molloy was the unanimous choice amongst the judges to become the 71kg champion.