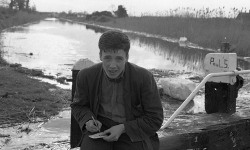 Discovering the story that lies behind the photograph

AN AMERICAN student in Trinity College, tracked down a Ballyfermot man, after launching a public appeal to ascertain his identity from a random picture taken nearly 30 years old.
Colorado native Emily Cookson, who is doing a Masters in Public History and Cultural Heritage, took an internship at Dublin City Library and Archive, and picked out old pictures to pursue for a project.
“I sought to discover a face with a story, even though that story was unknown to me,” said Emily.
“Towards the end of my search of the photographic collection, I saw an attractive young face with a candid expression looking up at me. I was immediately drawn to the photo and knew it had the potential.”
After choosing the photograph depicting a random teenager on the Eighth Lock, Emily started working with DCLA staff, and the photograph made its way to The Echo, along with a public appeal in the paper.
This ultimately led to the mystery man’s sister, Lisa Leddy, identifying him as her brother Mark Leddy on The Echo Facebook page.
Emily continued: “I was only looking for about a month, which isn’t bad. After sending him messages, we arranged to meet at the Library Archives in Parnell Street.
“I had the privilege of interviewing Mark to gain insight during the time in which the photo was taken, to today, and how he and the city have changed.”
The photograph was taken when Mark was “13 or 14 years old” in the “late 1980s”.
“He was highly interested in arts at a young age, and presumes he was writing poetry when the photo was taken,” said Emily.
“At the time, he wanted to be seen as an artist and recalled how he was listening to The Doors with the headphones around his neck. As we chatted, it became clear the arts played a major role in Mark’s upbringing and thus, in how he looks upon Ireland, both past and nowadays.”
Mark recited verses from WB Yeats September 1913 to Emily, and told her how he enjoys walking the same path along the canal today.

Emily continued: “He walks his dog in the area every day for three to four hours and is an avid photographer.”
“About a year ago, a friend introduced him to long exposure photographs at night. He took one photo and was hooked.”
Emily was certainly hooked by a picture from Ballyfermot’s past, but equally so, to discover the “evolving face of a Dubliner.”
She continued: “As soon as I contacted Mark, I learned that he was a man with a particular Irish style who challenged me to develop complementary questions to suit his unique persona. He was very accommodating.”