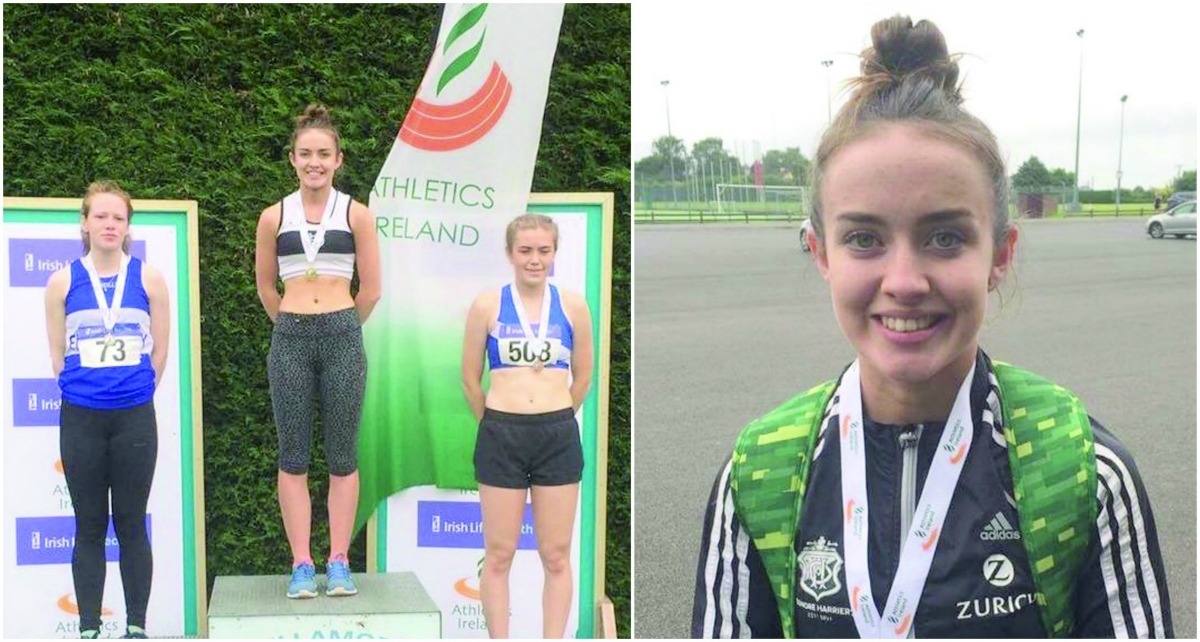 THERE was no shortage of medal winners for Donore Harriers at last weekend’s National Juvenile Track and Field Championships at Tullamore.

In the first of two days of competition the club recorded a return of one gold, two silver and a bronze in addition to three fourth place finishes.

In doing so, Masterson became the first female member of the Long-Term Development Plan juvenile distance squad, coached by Gerry Naughton, to win a national track and field medal.

Earlier in the day, Lara O’Byrne (5.19m) claimed Donore’s first medal in the championship when she placed third in the Under 18 Girls Long Jump, a mere two centimetres behind runner-up Emma Cheshire (5.21m) of Dunleer AC.

O’Byrne also contested the 100m Hurdles final in which she placed fourth in 14.68.

Both Kolade Abiodun and Max Carey made it through to the final of the Under 18 Boys 110m Hurdles, finishing fourth and seventh respectively.

A scintillating gold medal run by Aoife Lynch (12.25) in the final of the Under 19 Girls 100m was the highlight for the club on Day Two of the championships.

However, it was in her qualifying heat that Lynch stormed to a new championship best time of 12.14 – 5/100th of a second inside the previous mark of 12.19 held by Irish international Phil Healy.

In the final she held off the challenge of pre-race favourite Janine Boyle (12.26) of Finn Valley AC to take the win.

Lynch will be representing Ireland in the forthcoming European Under 20 Championships to be held in Grosseto, Italy between July 20-23.

Meanwhile Keri Noonan (42.66m) had to settle for silver after losing out to Ciara Sheehy (43.41m) of Liscarroll AC in the sixth round of throws in the Under 16 Girls 3kg Hammer.

In the Under 17 Boys 400m Jack Raftery eased the pain of placing fourth in no fewer than five championship events over the last few weeks by racing to a bronze medal in a new personal best time of 51.89.

Raftery, together with his team-mate Louis O’Loughlin, has been added to the list for possible selection to the Irish team contesting the forthcoming Celtic Games.