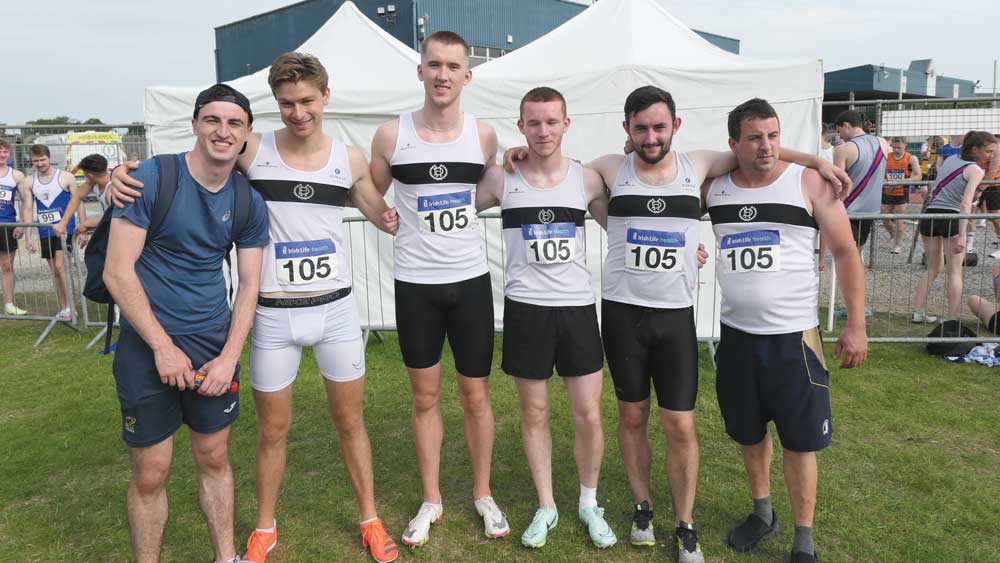 DESPITE missing several of their leading athletes, Donore Harriers saw their men’s team finished up fourth in the final of the National Track and Field League Premier Division in Tullamore on Sunday.

Didier Da Costa, at 49, took part in an entirely new athletics challenge – the 3000m Race Walk – turning in a brilliant performance to finished runner-up in 20.52.23.

Emmet Naughton emerged sixth from the hammer contest before then competing in his first Shot Putt event in which he finished fifth, just one centimetre shy of fourth.

The club’s leading male sprinter, Paul McDermott contested the Long Jump for the very first time with a final-round effort of 5.38m elevating him from eighth to fifth place.

Raftery, despite running from the inside lane, scooped the team’s only nine-pointer by winning the 400m sprint ahead of James Ezeonu of Leevale.

Michael McCarthy finished sixth in the High Jump and Niall Allen fourth in the Discus before Jack Byrne was overtaken 50m from the finish line in the 800m and had to settle for fifth.

Zak Higgins, competing in the Javelin for only the second time, finished sixth with Michael McCarthy fifth in the Triple Jump.

On the previous day at the same venue, the National Masters T&F Championships saw Niall Allen emerge with three gold medals after victory in the M45 2kg Discus, the Shot Putt and the 56lb Weight-For-Distance.

Emmet O’Briain won silver in the M45 1500m after which Aidan O’Rourke, in his first race of the year, came home fifth in the M35 800m and Fiona Smith-Keegan and Faith Hopkins each won bronze in the W45 High Jump and W45 Shot Putt respectively.