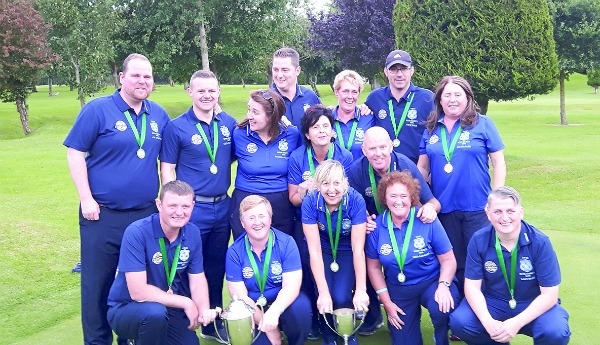 Double delight for Dublin as their long wait is ended

THE Dublin Gents and Ladies Inter-County teams enjoyed a weekend to remember as they sealed a delightful double in Kingswood on Sunday evening.

Having finished a distant second to Kildare at the Leinster Inter-Counties a month ago, the Dublin ladies and were determined to make amends with half the team from the host club.

The ladies started well on Saturday with Dublin captain Siobhan Keely and her RGSC clubmate Glenda Hoey the stars here with a brilliant 47 and Dublin score of -16 that saw them lead by four from Kil-dare.

In the second round of Scotch Foursomes, Dublin finished on -11 to complete Day One six shots clear of their near neighbours.
In the Gents it was an equally impressive day for Loughlinstown pair JR Crangle and Gary Healy who were the top performers with a 41 (-13) as Dublin finished on -31 for a three-shot lead over Louth.

They also performed well in the singles with two 49s, two 48s and a 46 by Crangle that allowed them to double their lead to four shots from Louth with the holders Cork ten strokes adrift.

The wind proved a real factor on Day Two but the ladies managed to keep pace with their nearest challengers Kildare.

Ger Ward, the All-Ireland Matchplay champion and Ireland’s Number One finished with a 51 (-3) and was ably supported by her clubmate Sheelagh Elmes (level par), Siobhan Keely and Ger Holland who finished on +2.

Glenda Hoey’s score of +3 meant the Dublin ladies had sealed the title and did so by an impressive 11-shot margin.

The Gents, meanwhile, were paired with Louth on Day Two and knew it was key to maintain their advantage in the foursomes.
They not only did that, but they doubled it as scores of 50, 49 and 49 saw them take a 10-shot lead into the singles.

In the toughest conditions of the day, the team managed to make it over the line by three shots from Louth to seal a first Inter-County title win since 1999.

It was fitting both captains were from the host club Siobhan Keely and Junior Smith, the latter once again being on a winning Inter County team 33 years after his first success in Navan in 1983.

It was a superb achievement for Dublin and marked a first double since 1991, something they will be looking to successfully defend in Newbridge next year.