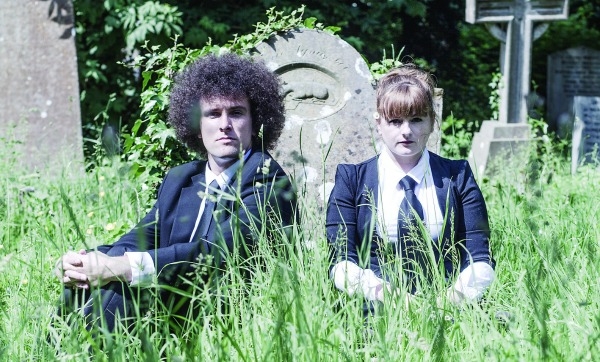 DRESSING up as a clown doctor to entertain sick kids, driving around on a nifty 50 for the 11850 ads and co-writing a theatre festival-fit play are just some of the antics Tallaght actor and established voice-over artist Keith Singleton gets up to.

Growing up in Belgard Heights, Keith (36) was very gracious and modest, and pretty funny, when speaking with The Echo this week as he prepared to launch his play ‘Looking Deadly’ in the Tiger Dublin Fringe – which runs until September 25.

Keith co-wrote the play with Niamh McGrath, with the duo also performing in the comedy drama which focuses on the world of the Irish funeral director.

Despite starting his festival run, Keith enthusiastically took some time out to talk with The Echo.

How did you get into acting?

After secondary school I bobbed about for a couple of years working at this and that, Brennan’s Bakery, Panorama Holidays, Irish Nationwide, Hallmark Cards, Argos and Morey’s Piers Amusement Park in New Jersey to name but a few.

Then one day a letter came in the post asking me to audition for the Performing Arts Course at The Liberties College. Turns out my friend Rosco had filled out an application form for me.

I guess he had seen enough of me being the class clown in Secondary School to know that acting might be worth a try.

Was writing and performing something you always wanted to do?

Writing and performing was never something I considered as a career and that is probably because I didn’t really know anyone who did that as a job.

My Brother Paul singing Ba Ba Black Sheep on Pat’s Chat in the early 80’s was the closest anyone in our family had got to a life in the performance industry when I was growing up.

What was your first performance?

Not including a nativity, or a brief turn as a Dinosaur in my school play, the first time I was on stage post-college was as Oisín in a Nationwide tour of Oisín in Tír na nÓg.

The whole show fit into a Hiace, there was a cast of three, two swords and a toy horse’s head. We completed over three hundred shows for schools in six months and I aged about eleven years – a bit like Oisín when he fell off the white horse.

The 11850 job came about when lovely Casting Director Gillian Reynolds got in touch with me wondering was I one half a comic duo. I replied “yes” and got straight on the phone to my brother Graeme.

Gillian called us for audition and we showed up, messed for a good 15 minutes and messed well enough that we were cast. It was a lovely job to work on with wonderful people.

Particularly Philly the Honda 50 man who sadly past away last year. He was responsible for restoring the Honda 50’s. Legend.

We never get recognized because of the ginger wigs and tashes, which is no bad thing. But because of my afro I usually get recognized as Marouane Fellaini. I was having his name chanted at me on the Luas just last night.

Tell us a little about ‘Looking Deadly’?

‘Looking Deadly’ is a fast paced, slick, comedy drama focusing on the world of the Funeral Director throughout the course of a funeral/wake. It’s all set in the rural town of Foystown and you get to meet all of the characters and enjoy the traditions associated with a good Irish funeral.

It was inspired by Niamh McGrath’s (Co-Writer / Performer) time working at a Funeral Director’s in her teens. The Funeral Director industry is one that has a bit of mystery about it and I think that makes it an interesting subject matter and makes the play a very entertaining watch.

Niamh applied for Show in a Bag (an artist development initiative of Dublin Fringe Festival, Fishamble and Irish Theatre Institute) and we were lucky enough to get it. The support of many has been tremendous in helping to get Looking Deadly into the shape it is in now.

How would you describe yourself as a writer?

As a writer, I would say writing funny is my go to and oops I forgot the drama. Huge lessons have been learned during the course of developing ‘Looking Deadly’. Working with Amy Conroy (Hot For Theatre) as a Dramaturg and Director has been a huge education with regard to the shaping of a script and not making it too easy for the audience.

I know I will definitely carry forward some of the great lessons learned from working with Amy into any future writing.

Is this your first time at Tiger Dublin Fringe?

This is my very first time performing at the Tiger Dublin Fringe. I have been away on so many occasions when opportunities have arisen to be part of the Festival so I am thrilled to bits to be making my Fringe debut at the lovely Bewley’s Theatre @ Powerscourt.

Why should people go to see Looking Deadly?

I think people should come to see ‘Looking Deadly’ because we have a fantastic jam (not ham) packed hour of theatre for you. I think many Irish will relate to a lot of the characters and I think many who aren’t from Ireland will delight in the traditions of the Irish Wake. It is a very well crafted hour of theatre and Niamh McGrath and myself leave nothing behind. I think Niamh’s characterization is worth the admission alone.

You also do voice over, what has been your favourite to date?

I got to voice a very camp animated peacock a few moons ago for Funda at Beacon Studios and that was the craic. I also used to do some voice work for Lucozade, which consisted of some high-octane “Get the Energy” for festivals and such. I like the high-energy stuff.

If you could act alongside any actor who would it be and why?

Tricky one. I’d say Jim Carrey because he’s my favourite but I’d prepare myself for not getting a look in.

I’ve kind of kept things fairly free in case there is interest in ‘Looking Deadly’ for a life after Fringe but I will be holding Workshops with Niamh McGrath for The Ark and as part of the Roola Boola Festival in Castlebar. I will also get to go back to working as a Clown Doctor in Crumlin Children’s Hospital & Temple Street Children’s Hospital, which I have been missing.