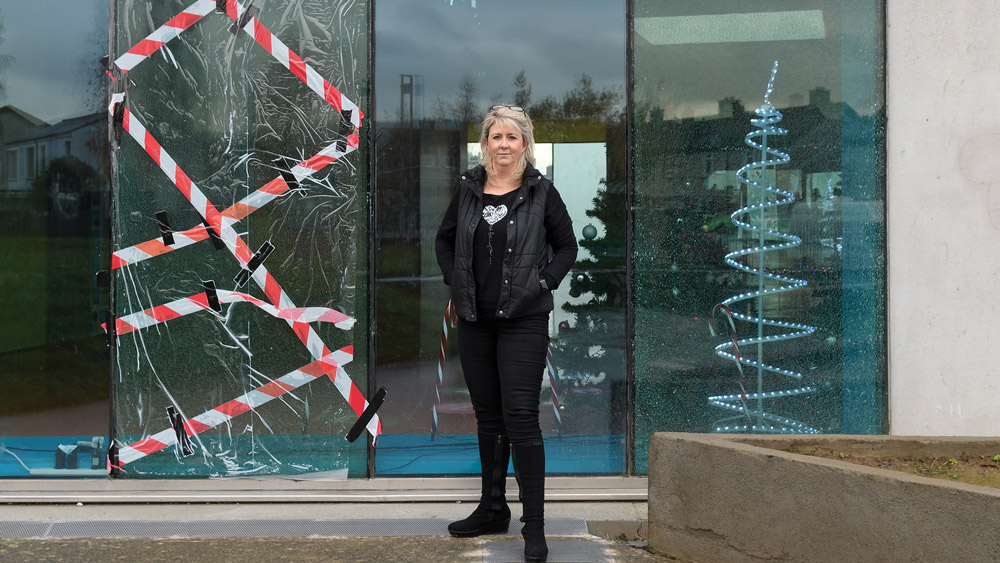 Sandra Lambert outside Brookfield Community Centre beside the broken windows

THE manager of a local community centre is appealing to parents to talk to their children about the dangers of throwing stones, after three of the centre’s windows were smashed in recent months.

The Brookfield Youth and Community Centre in Tallaght is now facing a bill of over €13,000 to repair the three windows, which were smashed in unrelated incidents.

The first window was smashed during the summer, the second four weeks ago, while last week, on November 29, centre staff entered the premises and found that a third window had been smashed.

Sandra Lambert, the manager of the community centre, told The Echo: “We were absolutely devastated when we saw that another window had been smashed.

“And it’s devastating for the community and the staff and everybody who’s involved in the centre. It does make you feel a little disheartened, that it’s happened again.”

The centre is now facing a hefty bill for repair works on the windows, and Ms Lambert said she believes that the people who smashed the windows weren’t aware of the impact that it would have.

“The message that we want to get out is that replacing windows takes away from the fun stuff we could be doing in the centre,” she said.

“It has a huge impact financially. To replace the three windows will cost over €13,000.

“We’re just asking parents and guardians to chat to the kids in their care and make sure that they know that throwing stones can have an effect on us, the staff and the community and what we can do for the community, because €30,000 is a lot of money.

“I’m hoping that the windows were broken accidentally, that it was just people throwing stones.”

Ms Lambert is keen to stress that the centre enjoys strong cooperation from local young people and that the windows being smashed isn’t indicative of the typical behaviour of the young people.

“I want to say that mostly, 99.9 per cent of the time, we have nothing but cooperation from and a good relationship with the community,” she said.

“We have tremendous support and cooperation from everyone in the community, and the windows being smashed is something that happened maybe because the people weren’t thinking of the consequences.

“The consequences of what they might see as harmless fun ripples throughout the community.”