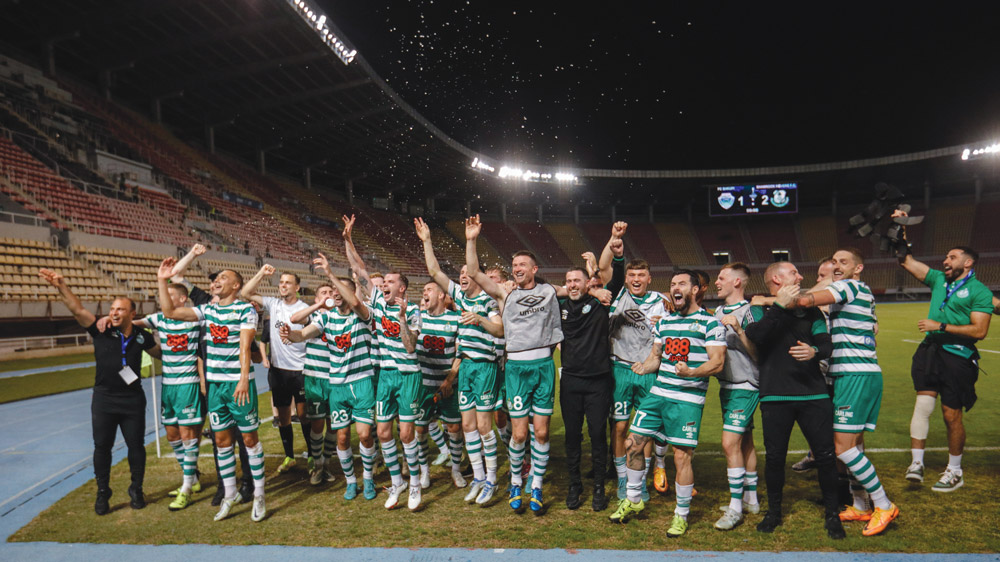 €3m cash windfall for Rovers after dramatic win in Europe

ANOTHER great week for Irish football as Shamrock Rovers secured at least a minimum financial bonanza of €3.3m, following their momentous 2-1 win over FC Shkupi in North Macedonia on Tuesday night.

After a 3-1 win versus the same opponents last week, the 5-2 aggregate win will see Rovers face Hungarian side Ferencvaros for a place in the group phase of the Europa League.

The Hoops are assured of six games in the safety net of the Europa Conference League should they lose to the 33-time Hungarian champs.

The financial benefits of playing in the Europa Conference League group stages will see participants receive €2.94m, along with additional bonuses for wins and draws.

But having come this far, the Hoops will be hungry for the bigger prize and better opponents in the EL.

The manner in which Rovers steadied the ship early on at a fervent Shkupi stadium will have pleased manager Stephen Bradley, and provides the team with confidence as they prepare for their next Euro battle.

Away wins are rare in Irish European football, and at the Todor Proeski Arena in Skopje, Rory Gaffney and Aidomo Emhaku bagged the second half goals to secure a famous victory.

This is great for Irish football but hopefully, it could get better.

Pat’s have a 1-0 advantage from the first leg after Serge Atakayi netted late on for the Inchicore outfit.

The game will be live on RTÉ News Channel, with the winner of the tie progressing to meet either Brøndby of Denmark or FC Basel of Switzerland.

The return leg was moved to Tallaght Stadium to facilitate UEFA’s stadia requirements for grounds in this round to have a capacity for seating of 4,500. Richmond Park, Pat’s ground has 3,000 seats.

Tallaght Stadium has 8,000 seats – albeit work on the fourth new stand will bring the grounds up to a capacity 10,000-seater by the end of July 2023 – an investment of approximately €11.5 million.

Pats are expecting “gigantic” support, reporting on Monday that tickets are selling out fast with the Main Stand of Tallaght Stadium already completely sold out and less then 150 tickets remaining for the East Stand, due to the “huge demand.”

The South Stand (behind goal) will also be open for supporters.