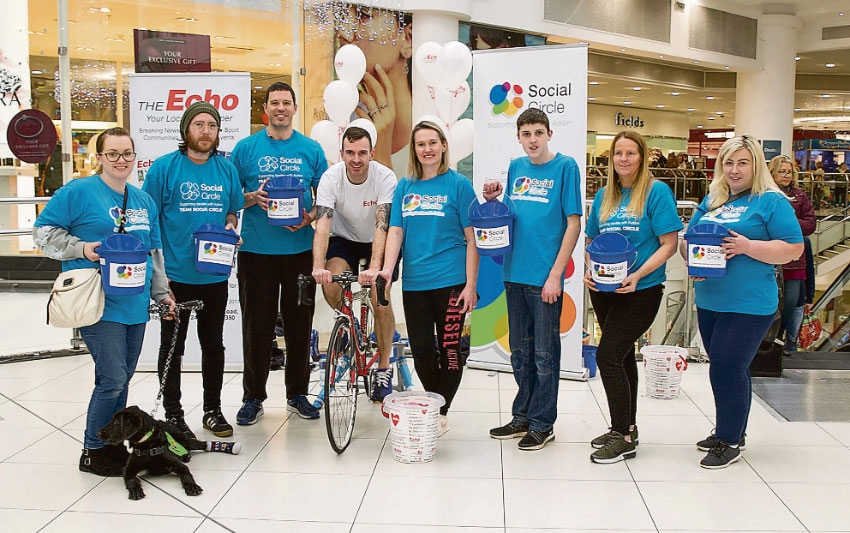 THE ECHO’S annual fundraiser was held last Thursday to great success with plenty of local faces helping The Echo team pedal their way to 300km over a 12-hour static cycling challenge.

Social Circle, which is a parent-led group that is focused on ‘supporting families with autism’ was chosen as The Echo's charity partner for the 2018 fundraiser.

With a target set of €3,000 and 300km, The Echo set out on their static-bike cycle challenge in The Square Town Centre with staff Brenda Mockler, Wendy Byrne, Emma Kennedy and Aisling Finn being joined by D Watch from Tallaght Fire Brigade to get the show on the road.

It was all hands on deck as D Watch hopped on the bike and shook buckets alongside member families from Social Circle.

Throughout the day, Mayor Mark Ward gave the team a dig-out on the bike and was followed by former Dublin and current St Mark’s hurler David ‘Dotsy’ O’Callaghan before Brenda crossed the 100km mark.

Social Circle co-founder Mairead Mekki brought along Cookie, the Labradoodle Autism Assistance Dog – who put a shift in and was a huge hit with passers-by and people donating.

Dylan Kennedy, a member of Social Circle 10+ group got the team over the targeted 300km mark.

A cheque presentation and reveal of the total amount raised will be made to Social Circle on Wednesday, December 12.

One last push to help get the targeted €3,000 can be made to our GoFundMe page HERE