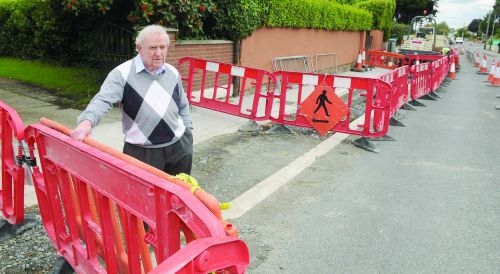 Elderly residents ‘trapped’ and isolated in their homes…

TALLAGHT village’s older residents have been “trapped” in their homes and “isolated” from friends and family due to ongoing road works to construct a €2 million cycle lane.

As reported in The Echo over recent months, the first phase works of the 3km cycle corridor between Tallaght and Templeogue started on Main Street in March, with construction crews moving onto Main Road in June.

Some 11 weeks later, work is still being carried out in front of the houses that line Main Road, many of which are occupied by older residents.

Gerry O’Toole (82) told The Echo: “There are a lot of elderly residents living along this stretch of road and these works are causing them huge difficulty, especially those who aren’t great on their feet or have sight problems.

“The roads have been left in a terrible state and some of my neighbours are simply not going out – they’re trapped in their homes.”

He added: “I drive and need my car to bring my wife, whom I care for, out-and-about.

“However, even in a car it’s very difficult to get out of your driveway and I can’t turn right into the village. I have to go left and go back around.

“There was a couple of times when the lads working on the road needed to work outside my house and they let me know the day before that I wouldn’t have vehicular access the next day.

“However, they never turned up but I still couldn’t leave my house in case they did arrive and I couldn’t get my car back in.”

He added: “A lot of my neighbours have also said that friends and family are not visiting due to the disruption on the road, which is isolating a lot of older people.

“Nobody would have minded some disruption in the short-term but 11 weeks of dangerous footpaths, health and safety hazards and the isolation of older residents is too much, especially when no real progress seems to have been made.

“This type of disruption is deadly for older people, especially coming into the colder months, but the council appears to have wiped its hands of it – and nobody is showing residents and businesses in the village any consideration.”

Last month, local businesses spoke to The Echo about the negative impact the works have had on their trade, with Spar on Main Road experiencing a 20 per cent drop in sales on this time last year, due to works outside the shop.

Motorists, who are experiencing long tailbacks, are also avoiding the village – which has had a knock-on effect on passing trade.

A number of areas on Main Road were free of cones, cordoning and construction machinery at the time of The Echo going to print.

However, the council did not provide the expected timeframe for the completion of works outside the homes on Main Road.