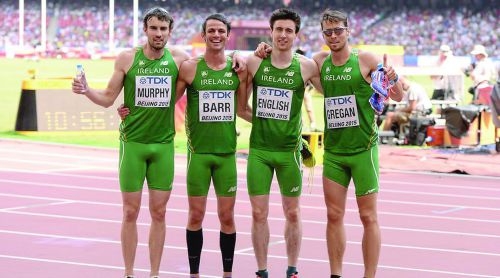 BRIAN Gregan helped the Irish Men’s 4x400m Relay team to a new national record of 3:01.26 at the IAAF World Champion-ships in Beijing.

The performance of the Tallaght man together with that of team mates Brian Murphy, Thomas Barr and Mark English, was enough to see Ireland finish 13th overall in a fiercely strong line-up.

“It was incredible to go just under a half a second quicker on our time at the European Final last year” Gregan told The Echo.

“The calibre of competition, particularly for the 400, is just so high. We were up against the likes of the USA, Trinidad and Tobago and all these guys and to run a new national record and finish 13th was just great.

“Being in Lane Nine on the outside and having to run by myself was very difficult
“The first leg is always hard because it’s just so staggered, but you just have to run your own race and not anyone else’s.

“I was determined to tee the lads up and help give us the best opportunity to get that national record” he said.

Their finishing time will no doubt aid their pursuit of Olympic Games qualification as the average of each team’s two best times is what determines whether they make the top 16 for Rio next year.

“With relay, you don’t have an abundance of opportunities to compete” said Gregan.
“You have to find the right competition and even then you have to get the lads together which is not always easy” he explained.

Gregan, himself, is targeting Olympic qualifi-cation in the 400m and is just 0.13 off the standard.
“I had a couple of coaching changes and then a couple of injuries, so I didn’t really get running until the tail end of the season, but I’m very close to the Olympic standard.

“That’s my main goal, but I’ll always try to make myself available for the relay squad too” he added.

The European Champion-ships in June could provide the next big opportunity for the Irish relay squad to secure an Olympic berth.