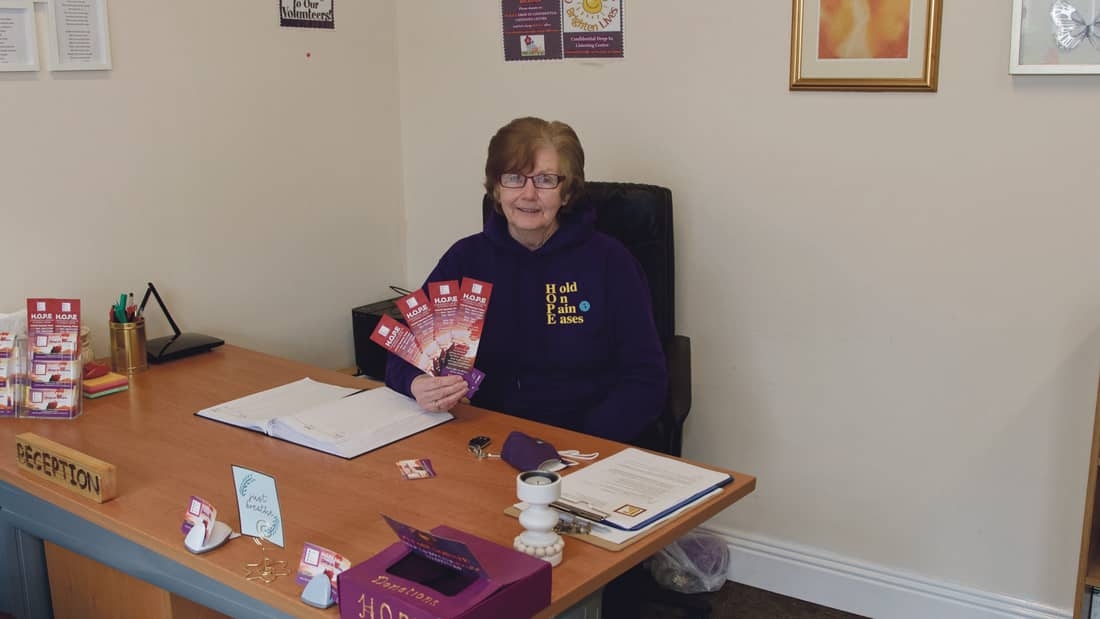 ‘Even if someone is feeling a little bit lonely, they can talk to us’

THE founder of a suicide prevention service in Tallaght said there has been a 30 per cent increase in people accessing their services since the pandemic began – and she is urging people who are struggling with their mental health to reach out to them for help.

HOPE (Hold On Pain Eases) was established by Mary McLoughlin in 2013, as the culmination of her dream to develop a service to help those who are struggling with their mental health, after her sister, Kathleen Hatton, and her nephew, Sean Hatton, died by suicide in the 1990s, just two years apart.

Mary McLoughlin outside the HOPE office

HOPE, which is based at the back of the former BP O’Reilly building in Tallaght Village, helps people who are feeling depressed, anxious or suicidal, and Ms McLoughlin said she has seen a 30 per cent increase in people accessing HOPE’s services since the onset of the pandemic.

“There are a lot of people who are feeling really low, and loneliness is a lot to do with it,” she told The Echo, “and also isolation and not having someone to talk to.

“Being stuck in the house all the time and not having anyone to talk to can hugely affect your mental health.”

Ms McLoughlin is encouraging anyone who is struggling to reach out to HOPE, either via text or phone call on 089 610 5476, or by messaging the HOPE Suicide Prevention Centre Tallaght Facebook page.

HOPE are also holding face-to-face assessments and counselling sessions – while adhering to public health guidelines – for people who are in crisis, by prior appointment only.

When asked what she’d say to someone who is struggling with their mental health but is unsure about seeking help, Ms McLoughlin said: “They should just pick up the phone and call us, or send us a text and we’ll ring them back, or send us a Facebook message – we answer straight away as much as we can.

“Whatever your problem is, it can be overcome. There is no problem that can’t be solved by talking about it and getting the right help.

“Even if someone is just feeling a little bit lonely, they can talk to us.”

There is a team of six volunteer counsellors in HOPE to help people who are struggling, and Ms McLoughlin wants the community to know the service is here for them.

“People are dying by suicide and they don’t even know that HOPE exists,” she said, “so we want to get the word out that we’re here and are willing to help in any way we can.”

HOPE can be contacted via phone on 089 610 5476, or by messaging the HOPE Suicide Prevention Centre Tallaght Facebook page.