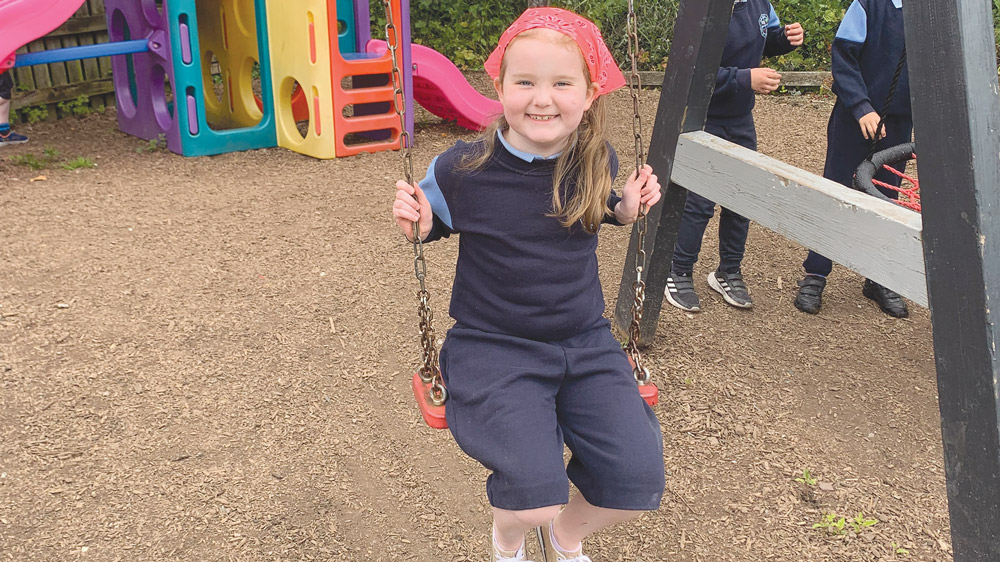 Faye Miley playing on the swings

Firefighters out in force to help raise funds for little Faye

A CARWASH will be manned by firefighters in Tallaght Fire Station this Sunday, July 17, from 3pm to 9pm to raise funds for medical treatment for a local schoolgirl with a high-grade form of cancer.

Seven-year-old Faye Miley from Rathcoole, who is a pupil in Holy Family National School, suffered a sudden onset of headaches and vomiting last March.

Faye’s parents Sandra and Robert, and their GP, initially thought that Faye had a virus, however in April her eyesight started to be affected so her parents brought her to an optician to investigate the cause.

The optician said that Faye had lateral inflammation of both of her optic nerves, and she was then sent to the Eye and Ear Hospital, who referred her to Children’s Health Ireland, Crumlin.

“The A&E consultant [in the Eye and Ear Hospital] ran a morning full of tests and in consultation with her team referred us to Our Lady’s Hospital in Crumlin immediately,” Sandra told The Echo.

“Here I began to get nervous. We were sent home that night and Faye had her worst episode of headache so far.

“Her little body shook in pain, and we knew this was serious. The following day Our Lady’s confirmed there was a lesion on Faye’s brain. We were terrified and heartbroken.

“We were immediately sent to St Gabriel’s ward in Temple Street Hospital.”

While in Temple Street, Faye was kept under observation and underwent an MRI.

It was initially hoped that the lesion on Faye’s brain would be benign, and she had surgery to resect a 5cm Thalamic tumour from her brain. 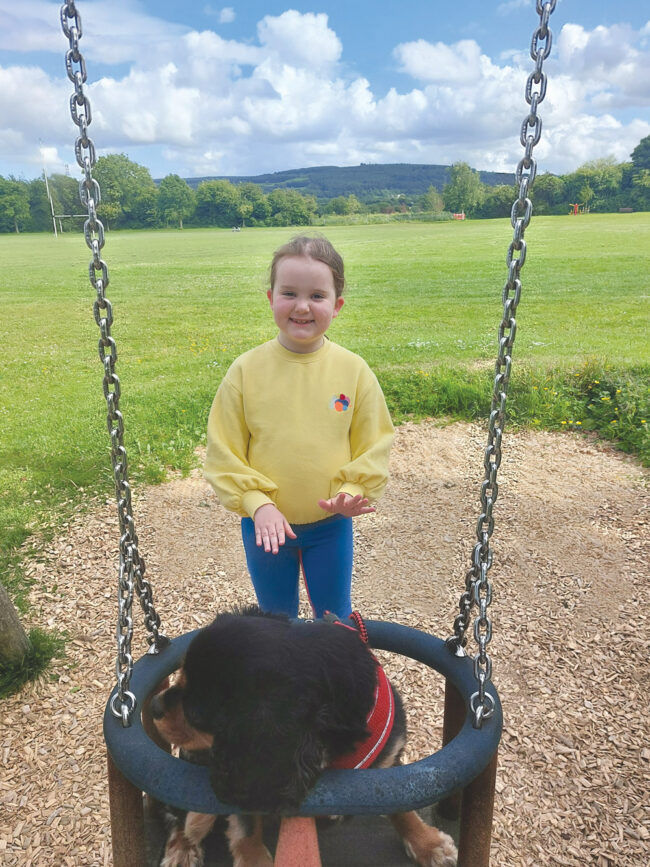 Faye Miley playing on the swings

A few days after the surgery, the Mileys received the devastating news that Faye’s tumour was Glioblastoma Multiforme Grade IV, a high-grade form of cancer, and the prognosis is poor.

“We don’t look at the time frame, we literally live from day to day,” Sandra said.

“We have been very lucky to have such an amazing team from the start. Faye has had early intervention, 80 per cent of the tumour removed, speedy access to radiotherapy with who I believe to be the best oncology team in the country.

“So we’re looking on the bright side of life. The treatment we are investigating is in France, it is still in trial stages but as we are in such a great place with the GoFundMe, we are open to serious treatments anywhere that our team believes in.”

Last month, Faye had a seizure which prompted the Mileys to call for an ambulance, and a crew of firefighter paramedics from Tallaght Fire Station were dispatched to the scene.

Faye has since recovered from her seizure, but she has had a lasting impact on the Dublin Fire Brigade paramedics who treated her, and her local community.

As news of Faye’s illness spread, the community got behind the Mileys, including family friend and Tallaght firefighter Andy Young who has organised the car wash this weekend.

Andy told The Echo that the carwash will be manned by off-duty firefighters who’ll be volunteering their time for the charity event, and there will also be spot prizes from local businesses on the day.

Now the staff from ‘A’ Watch in Tallaght Fire Station, which Andy is in, and ‘B’ Watch, who treated Faye last month, will be hoping to raise funds for the young girl’s treatment.

“We just want to raise as much money as possible to make life that little bit easier for them, as they’re going through such a difficult time,” Andy said.

“We’re asking people to donate and give what they can, and every donation will be going straight to the Miley family to support Faye.”

As for how Faye is doing now, Sandra said her daughter is a happy-go-lucky girl who’s taking it all in her stride.

“Faye only knows what she has to, that the doctors are trying their best to make her better,” she said.

“She has an amazing life with her big sister Lucy, she’s a happy, spicy, funny little character and too much information could dull her sparkle.

“Apart from her short stint in ICU, Faye has stayed in amazing health. Apart from her diagnosis you would never know she was poorly in the first place.”

Donations will be accepted at the carwash, and donations can also be made on the Fight with Faye GoFundMe.